In line with the observance of the 2022 18-Day Campaign to End Violence Against Women (VAW), NAMRIA, through its Gender and Development (GAD) Focal Point System (GFPS), conducted an information campaign on Republic Act (RA) number 11313. RA 11313, also known as The Safe Spaces Act or Bawal Bastos Law, took effect when it was signed by then President Rodrigo R. Duterte on 17 April 2019.
Attended by select faculty and student-leaders, the campaign was held at the faculty lounge of Gat Andres Bonifacio High School (GABHS), Zone 3, Barangay Fort Bonifacio, Taguig City on 01 December 2022.
The activity started with a prayer and was followed by the opening/welcome remarks of NAMRIA GFPS (NGFPS) Focal Person, Resource Data Analysis Branch (RDAB) Director Ofelia T. Castro. Director Castro thanked all those who attended the activity. She also acknowledged the support given by NAMRIA Administrator, Usec. Peter N. Tiangco, PhD and GABHS Officer in Charge (OIC)-Principal, Mr. Ferdinand G. Delgado for allowing the NGFPS to present the salient features of RA 11313 and to make them aware of gender-based sexual harassment (GBSH) issues.
NGFPS Adviser, Deputy Administrator (DA) Efren P. Carandang also delivered a message for the attendees. His message dwelt on the 2022 campaign theme UNiTEd for a VAW-free Philippines. He explained that the theme is aligned with the United Nations' global campaign, Unite By 2030 to End Violence Against Women Campaign, which is a multi-year effort aimed at preventing and eliminating violence against women and girls worldwide.
Atty. Jessie M. Racimo, OIC of the Support Services Branch (SSB)-Administrative Division, then presented RA 11313 to the attendees. His lecture covered all forms of GBSH committed in public spaces, educational or training institutions, workplaces, and online spaces. He answered questions from the attendees during his presentation. In her response, Ms. Marina B. Biñas, one of the teacher-attendees, thanked the NGFPS for providing information on RA 11313, which she said they had not been fully aware of. She also encouraged the students to be more vigilant against GBSH and report to the school authorities should there be any case of it happening within their school.
In his closing remarks, GABHS OIC-Principal Delgado expressed his appreciation to NAMRIA because their school was chosen as the first beneficiary of the activity. He also told the students to be "beacons" by encouraging them to share with their fellow students the learnings they received.
Deputy Administrator Carandang, Director Castro, Attorney Racimo, and this writer each received, as a token of appreciation, a framed certificate of appreciation. Meanwhile, the attendees received NAMRIA GAD information and education campaign materials and copies of the Volume XXV, revised 2019 edition of Infomapper. Infomapper is NAMRIA's publication on surveys, mapping, and geospatial information management.
NGFPS Vice Focal Person, Geospatial System Development Division-Geospatial Information System Management Branch (GISMB) Chief Arlene B. Brillantes and this writer served as the activity lead and coordinator/emcee, respectively. Mr. Erwin D. Famatiga and Mr. Vener Quintin C. Taguba, Jr. of GISMB; Ms. Jovelyn A. Naldo and Ms. Ros-Ann T. Cia of RDAB; and Ms. Maria Isabelle A. Menodiado, Mr. Francisco V. Dagohoy, and Mr. Antonio D. Dalaygon of SSB provided documentation and logistical support to the activity. Mr. Taguba took the pictures used in this article. 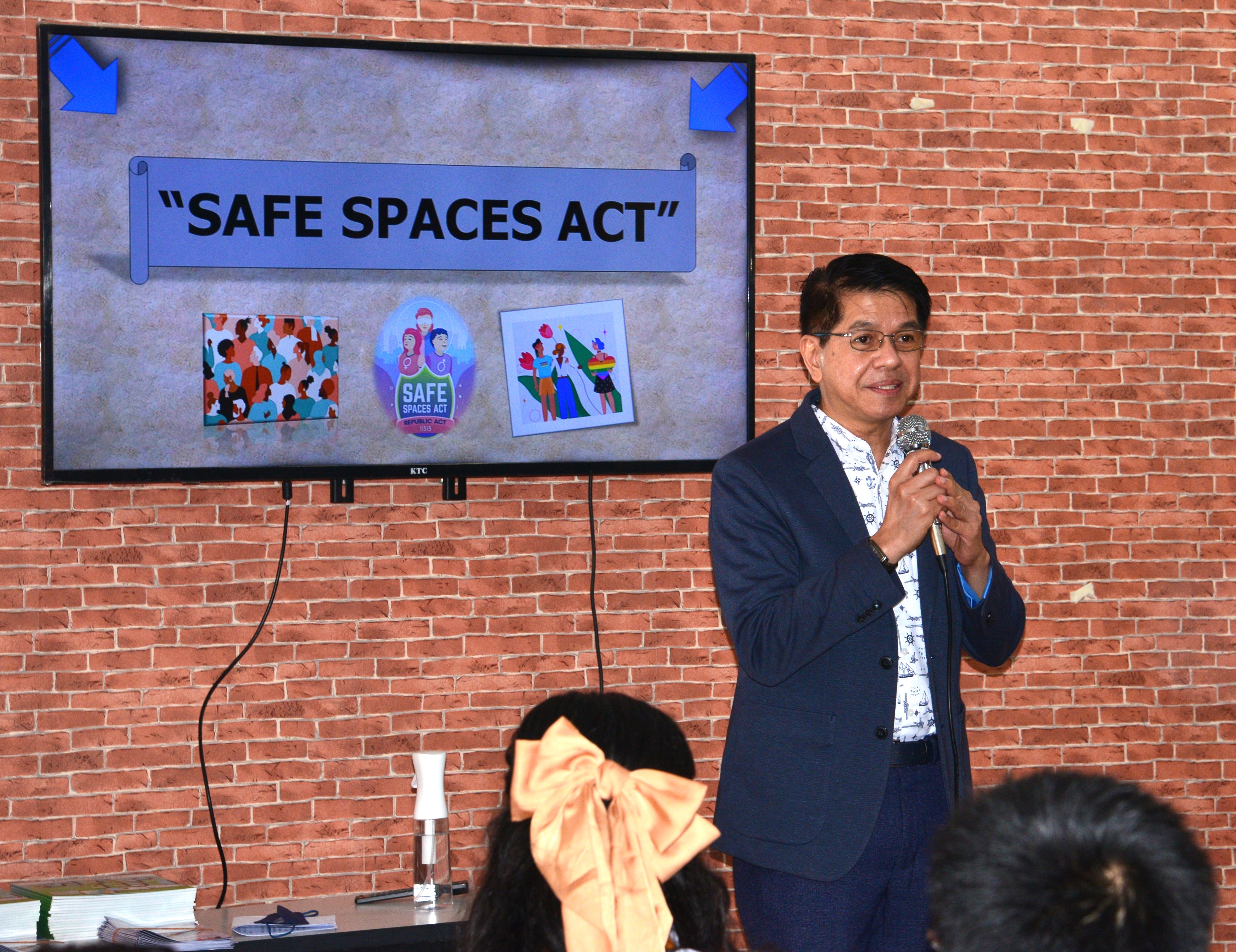 Deputy Administrator Carandang, in his message, calls on everybody to be united for a VAW-free Philippines. 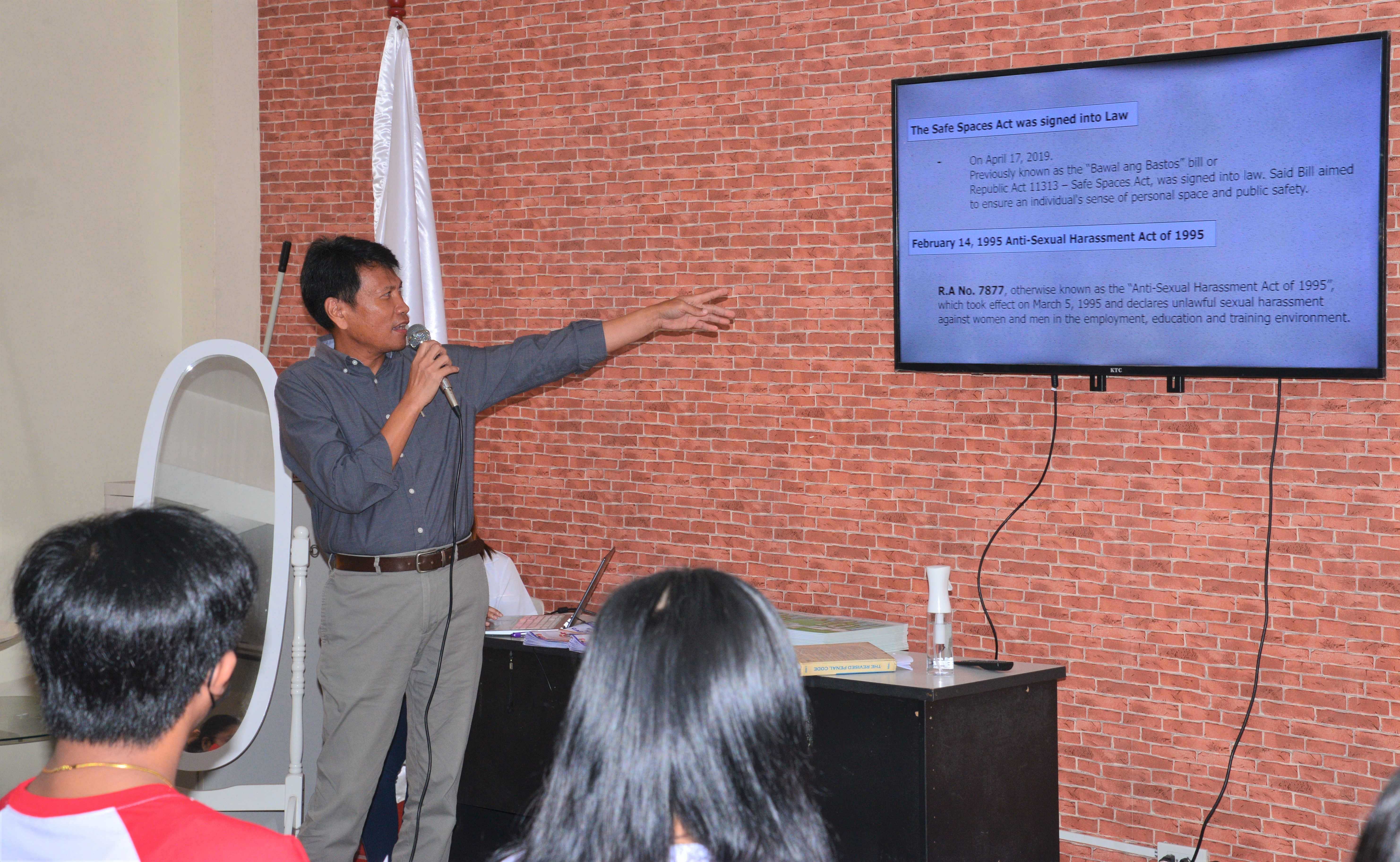 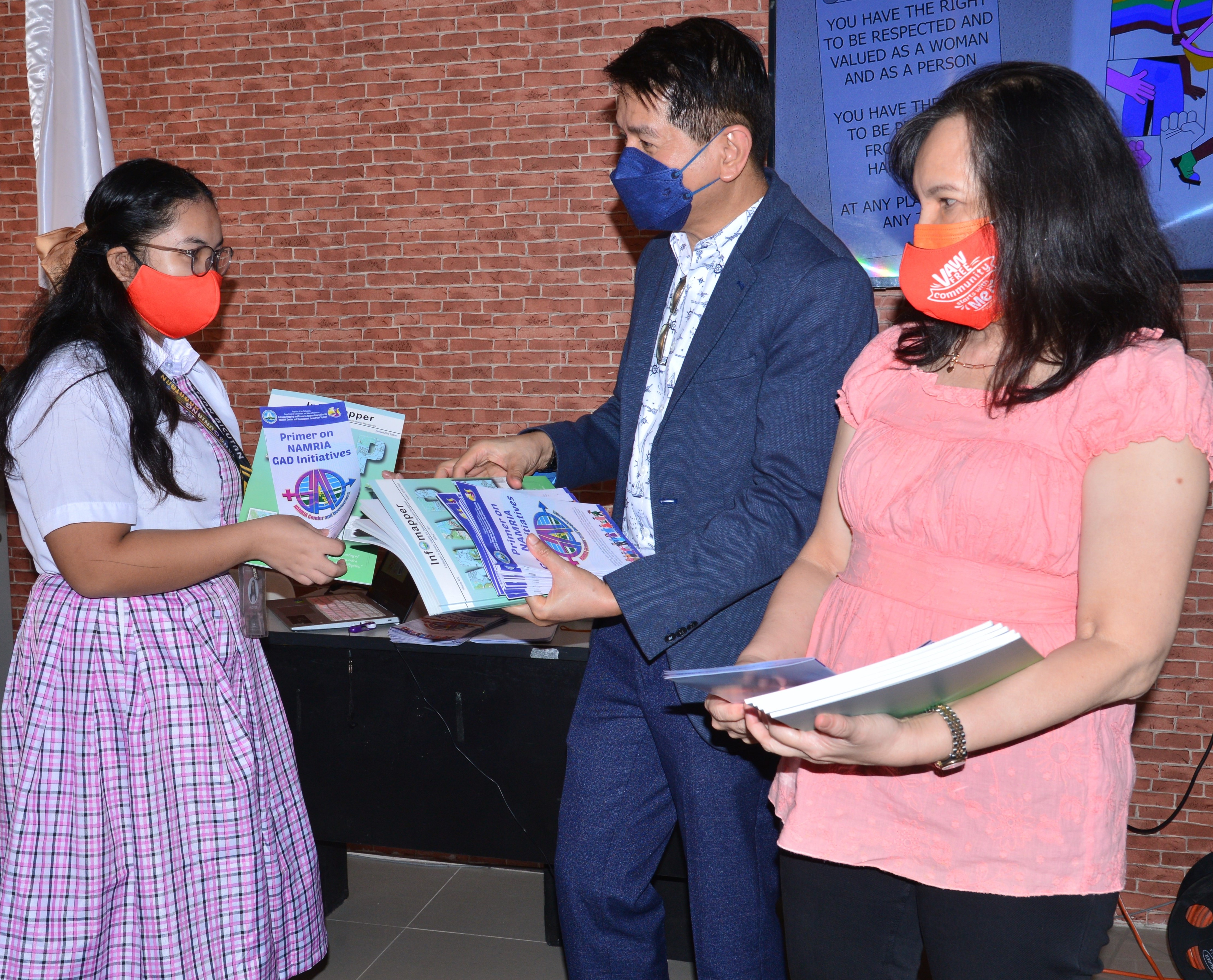 Deputy Administrator Carandang and Director Castro lead the distribution of NAMRIA tokens of appreciation to all the attendees. 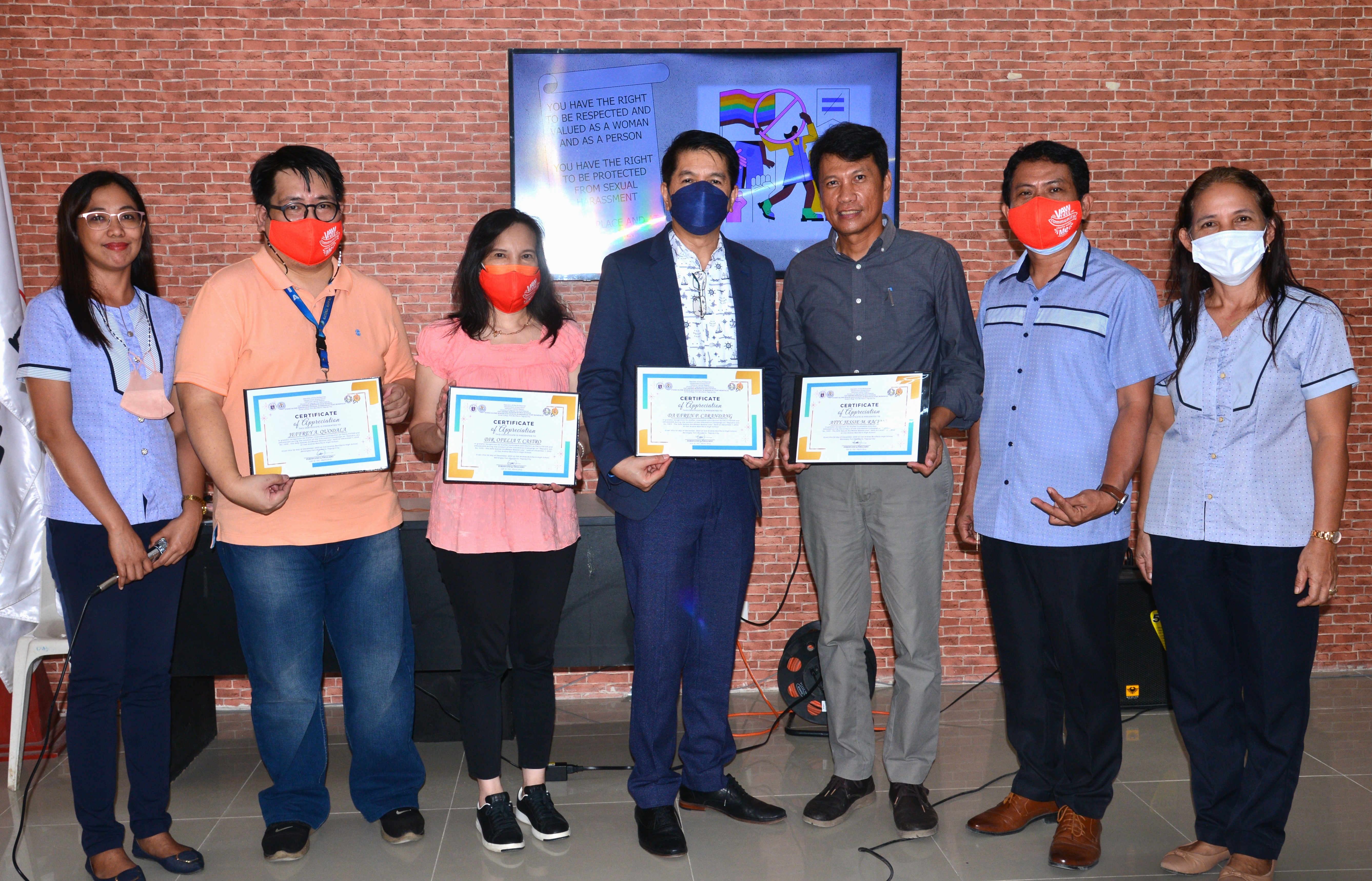 Awarding of the certificates of appreciation 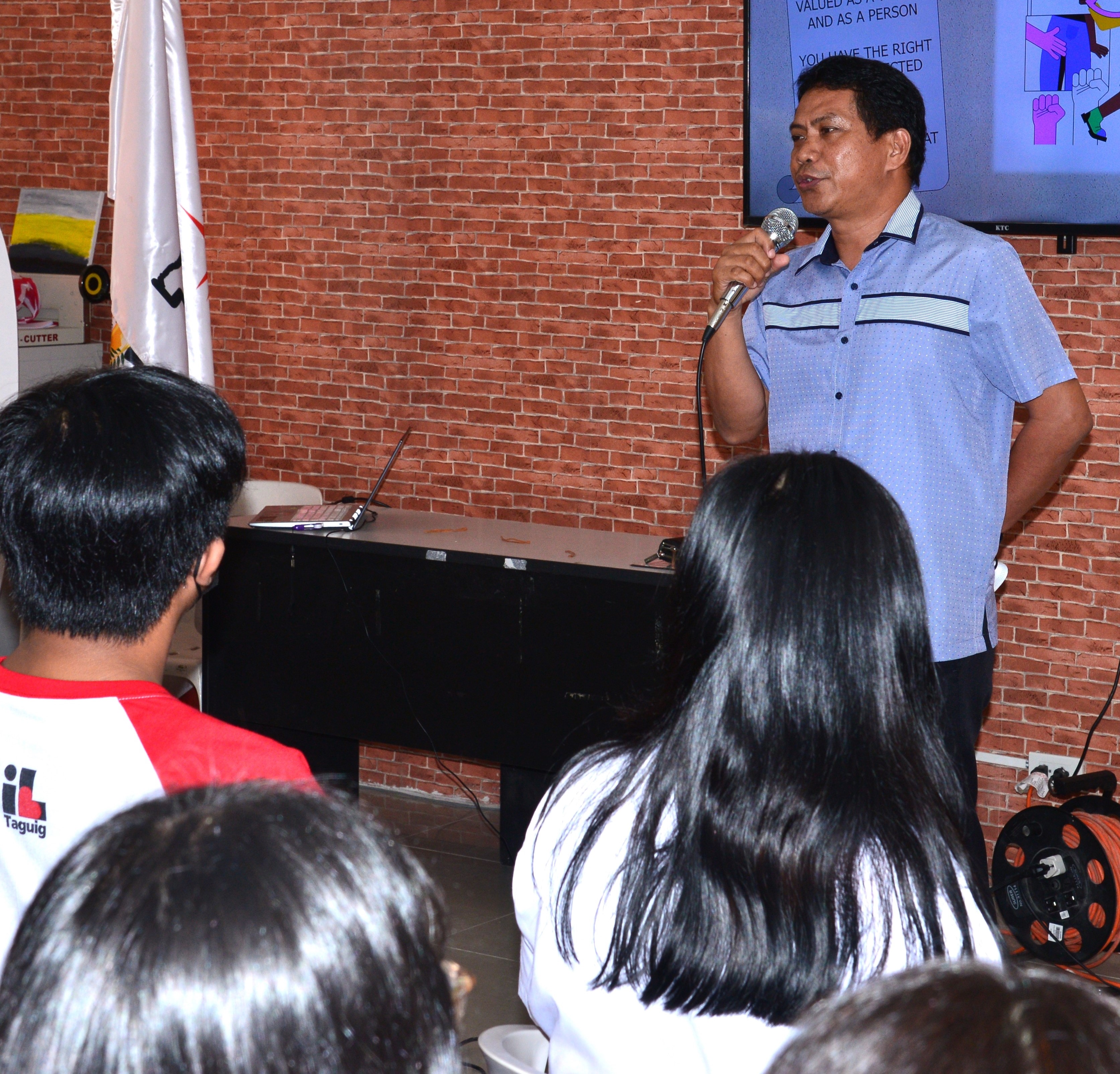 GABHS OIC-Principal Delgado, in his closing remarks, encourages the students to be "beacons" to their fellow students. 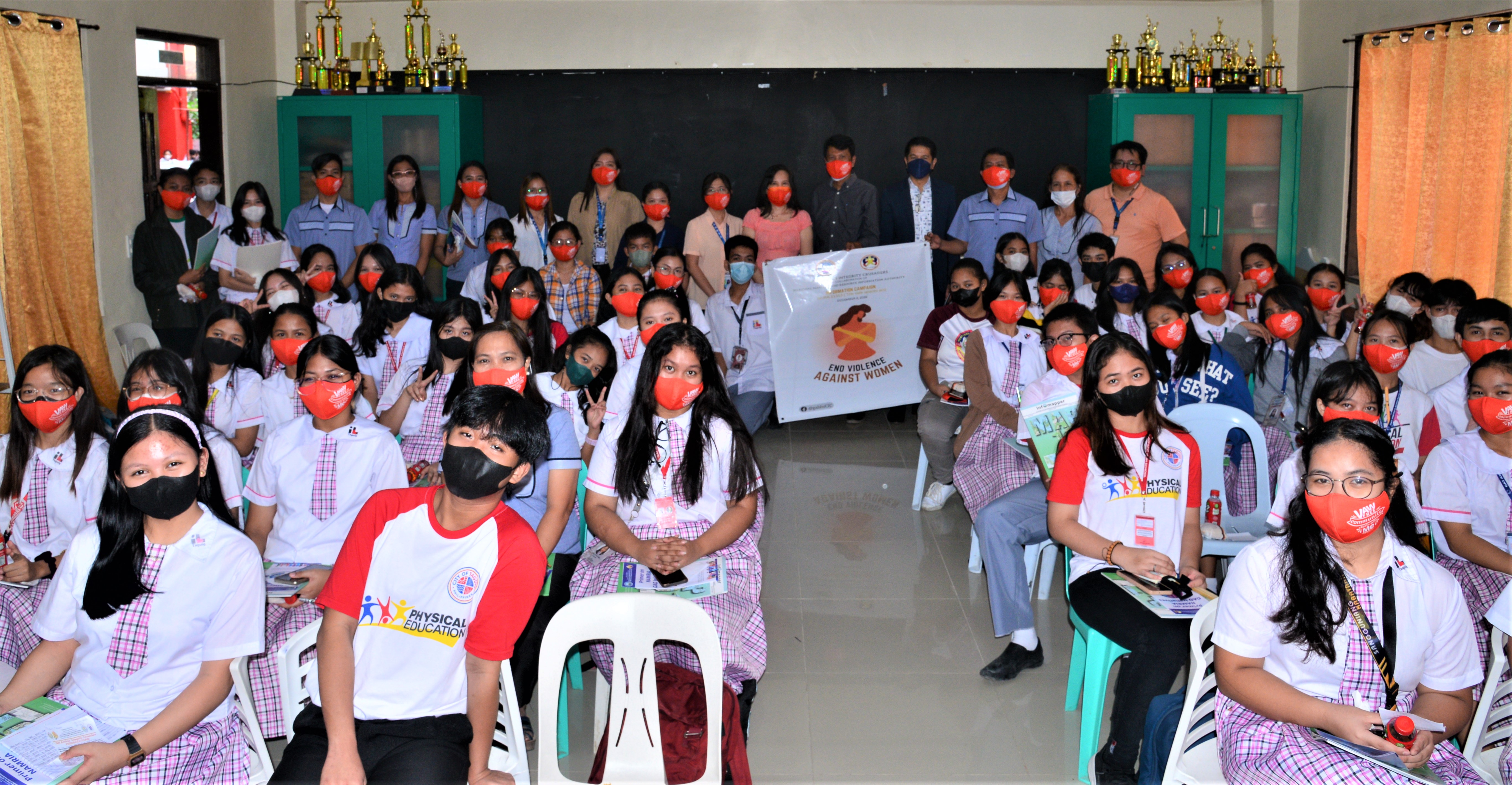