NAMRIA Administrator, Usec. Peter N. Tiangco, PhD, approved the conduct of a webinar on the Mapping of Safe Open Spaces for Earthquake Resiliency of Metro Manila, as part of NAMRIA’s observance of the National Disaster Resilience Month (NDRM).  The event was held via YouTube live streaming on 27 July 2021.  The theme for this year’s NDRM is Tamang Pamamahala’t Kahandaan, Kaalaman, at Pagtutulungan sa Sakuna at Pandemya’y Kalasag ng Bayan.
OIC-DA John Santiago F. Fabic opened the event by highlighting the importance and timeliness of the webinar.  He hoped that the webinar would help raise awareness on geological hazard resiliency and on how NAMRIA addresses issues on national resilience, especially that the country experienced a 6.6 magnitude earthquake the weekend before the webinar. 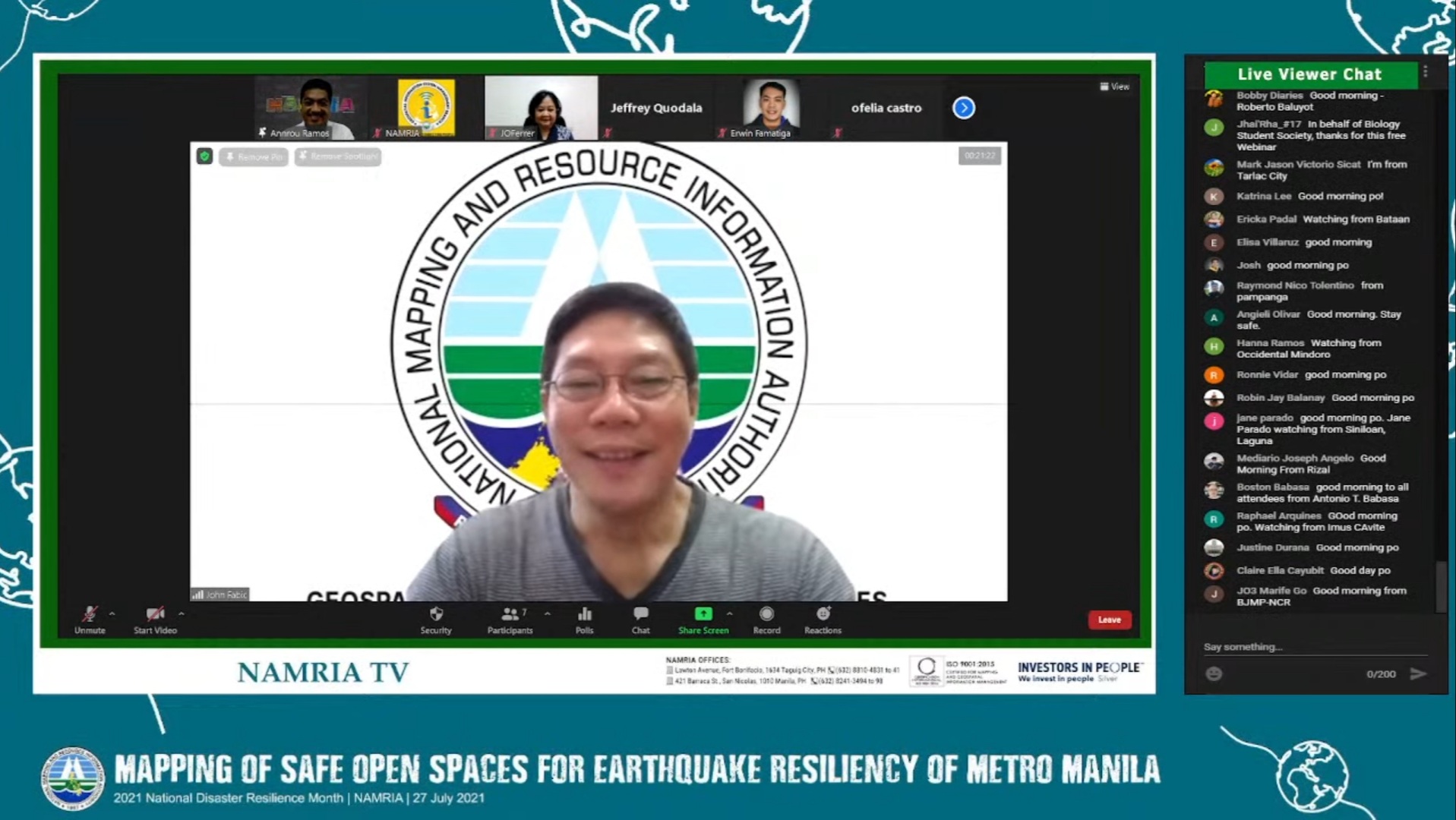 Officer in Charge-Deputy Administrator Fabic delivers his opening remarks.
The webinar provided an in-depth discussion on the mapping of safe open spaces for earthquake resiliency of Metro Manila, also known as the quadrant mapping project.  The project was one of the ways to prepare for The Big One, an earthquake expected to have a strength of around magnitude 7.2 and intensity VIII ground shaking, that may strike the Metro.  Ms. Josephine O. Ferrer, Resource Data Analysis Branch (RDAB) Supervising Remote Sensing Technologist, presented the details of the project from its beginnings to implementation.  These include the standards of safe open spaces, information dissemination with the local government units, and the project’s possible expansion to include areas and regions near Metro Manila.  A question-and-answer portion followed shortly after the discussion. 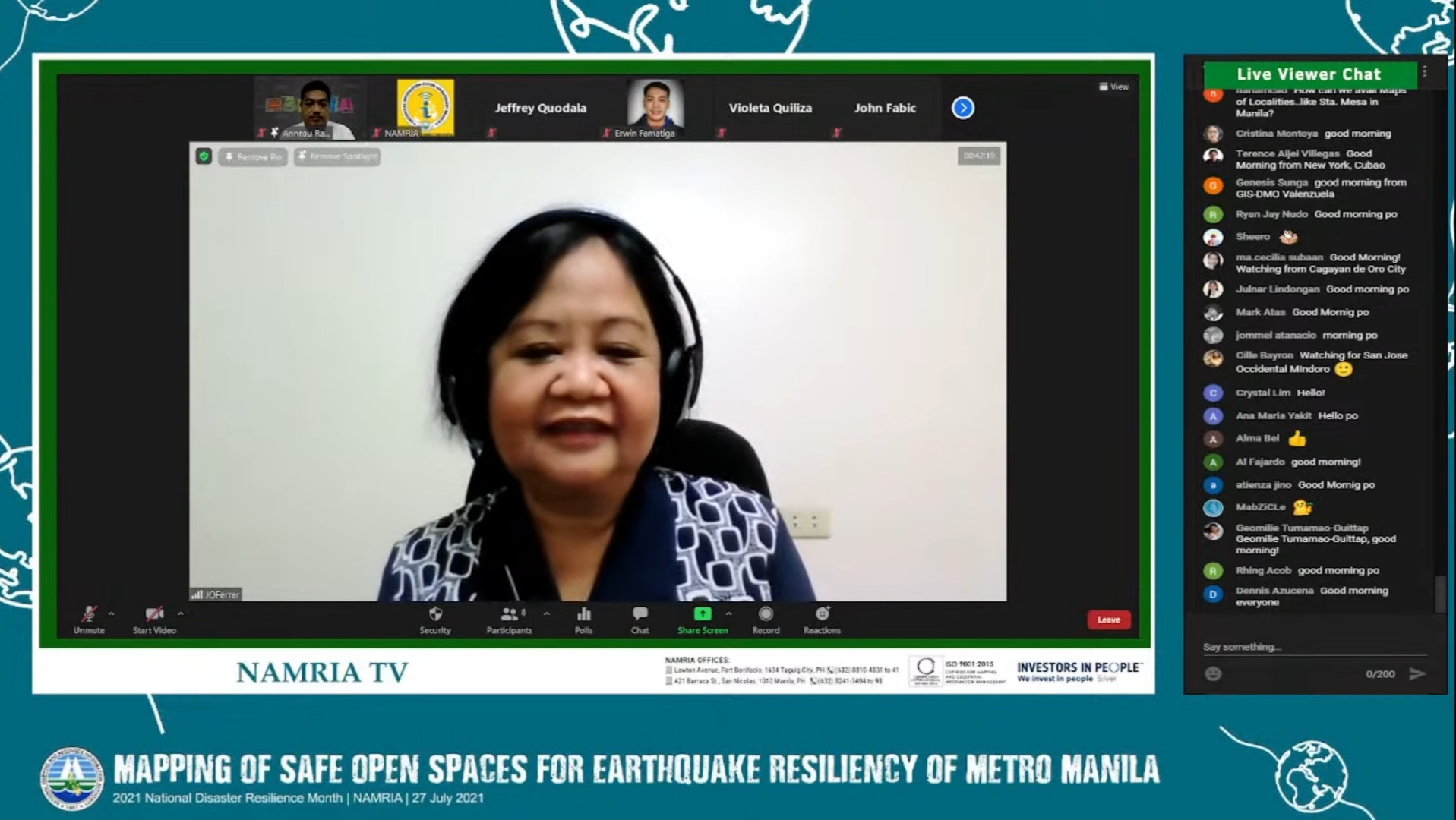 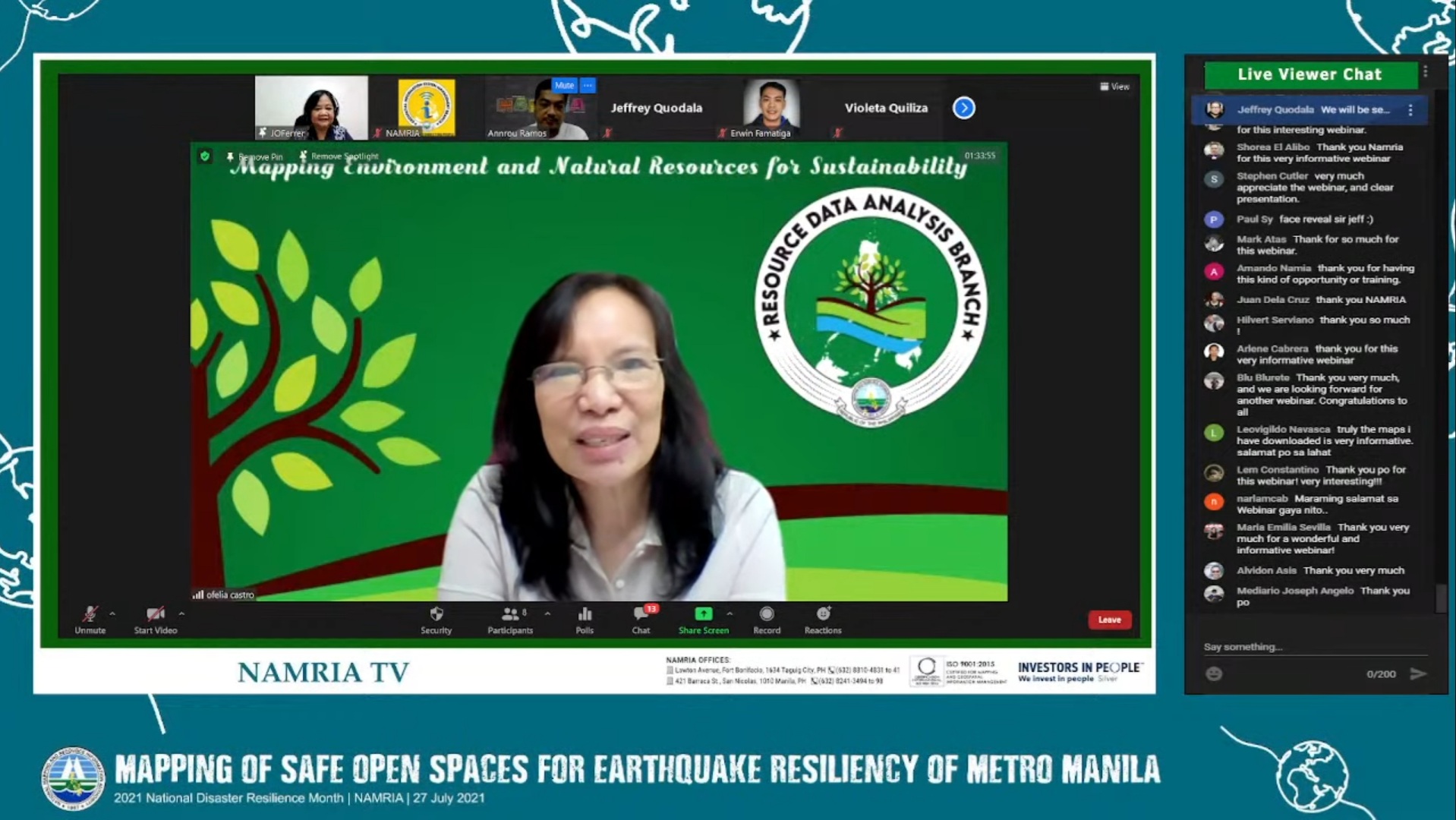 RDAB Officer in Charge-Director Castro concludes the webinar with her message.
A total of 989 people participated in the event, making it the NAMRIA webinar with the highest number of attendees to date.  The participants were from the public and private sectors all over the country.
The webinar was organized by NAMRIA’s Geospatial Information Services Division (GISD) of the Geospatial Information System Management Branch (GISMB), together with the Geospatial Integration Division (GID)-RDAB.  It was spearheaded by Mr. Jeffrey A. Quodala, facilitated by Mr. Annrou R. Ramos, and technically supported by Mr. Jeffrey M. Aguillon and Mr. Erwin D. Famatiga.
Pursuant Executive Order number 29 of 2017, the observance of the National Disaster Resilience Month aims to promote disaster resilience throughout the country by providing disaster awareness campaigns covering four thematic areas: (1) prevention and mitigation, (2) preparedness, (3) response and rehabilitation, and (4) recovery.