NAMRIA, through its Bayanihang Bayan Desk (BBD), organized three relief drives for the victims of typhoons Rolly and Ulysses in Marikina City; Amulung, Cagayan; and Oas, Albay.  The relief drives, dubbed Bayanihang Bayan sa Panahon ni Rolly at Ulysses: NAMRIA Bayanihang Bayan Desk Relief Drive for Victims of Typhoons Rolly and Ulysses, were made possible with the support of NAMRIA Administrator, Usec. Peter N. Tiangco, PhD.  The NAMRIA Administrator authorized the BBD to reach out to all NAMRIA officials and employees, both current and former, including generous friends, for cash and in-kind donations from 13 November to 04 December 2020.  More than a hundred thousand pesos was raised and used for the relief drives.
The first relief drive was held in Barangay Nangka, Marikina City on 04 December 2020.  Donations consisting of 200 relief bags containing assorted groceries and nine boxes of pre-loved clothes were received by officers of the Camacho Phase I Homeowners Association.  The bags were then distributed by BBD representative Jonathan S. Ballesteros of the Mapping and Geodesy Branch and Ms. Syrene A. Inocencio of the homeowners association.  A pair of wooden crutches was also given to a person with disability, Ms. Nancy S. Escobido, during the said activity.  On behalf of the beneficiaries, Ms. Inocencio thanked the NAMRIA BBD for the generosity extended to them. 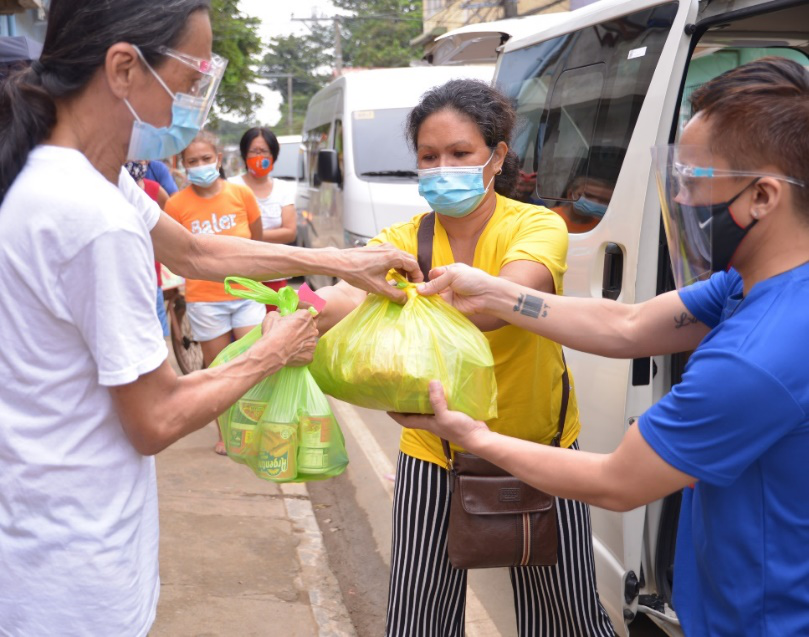 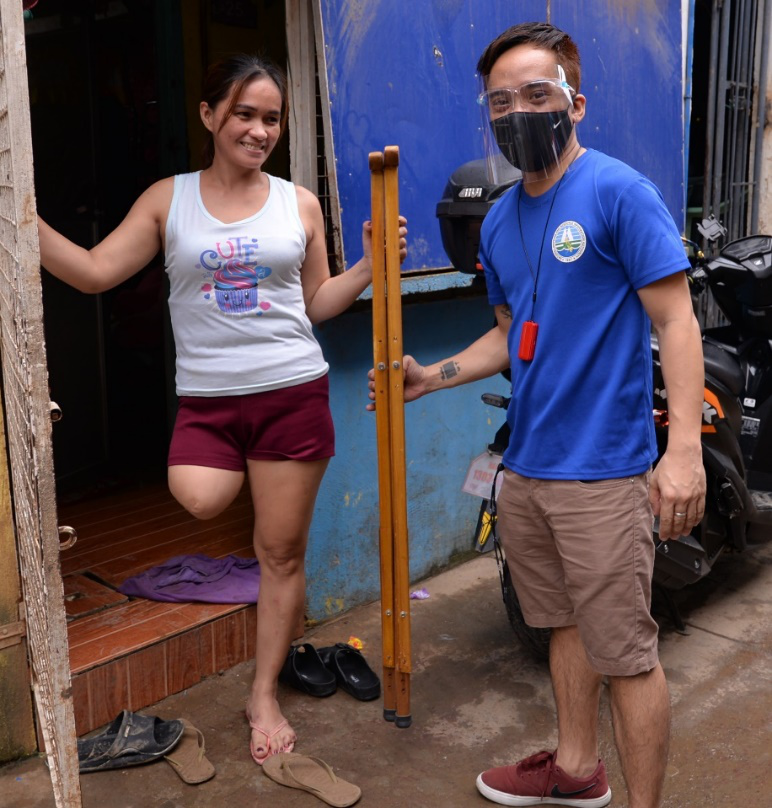 BBD representative Ballesteros and other BBD volunteers and homeowners association officers pose
for a souvenir photo after the distribution of relief bags.
-- VENER QUINTIN C. TAGUBA, JR.
On 06 December 2020, BBD partners from the Rizal Youth for Social Action Association (RYSAA) of Rizal, Kalinga went to Barangay Annafatan, Amulung, Cagayan for the second relief drive.  RYSAA distributed 152 relief bags containing assorted groceries and toiletries which were placed in plastic pails.  Ms. Mel Carla B. Duque, a former on-the-job trainee of NAMRIA, represented RYSAA during the distribution.  RYSAA was assisted by Mr. Alvin V. Teodero, a barangay health worker assigned at the Local Government Unit (LGU) of Amulung, Cagayan.  In her brief message, Ms. Duque acknowledged the partnership between NAMRIA and RYSAA and thanked the former for its benevolence to their kailyans (kababayan) through their Bangon Lambak relief drive at Cagayan and Isabela provinces. Volunteers from RYSAA and coordinators from Barangay Annafatan, Amulung, Cagayan pose
for a souvenir photo before the distribution of the relief goods. -- RYSAA Media Team 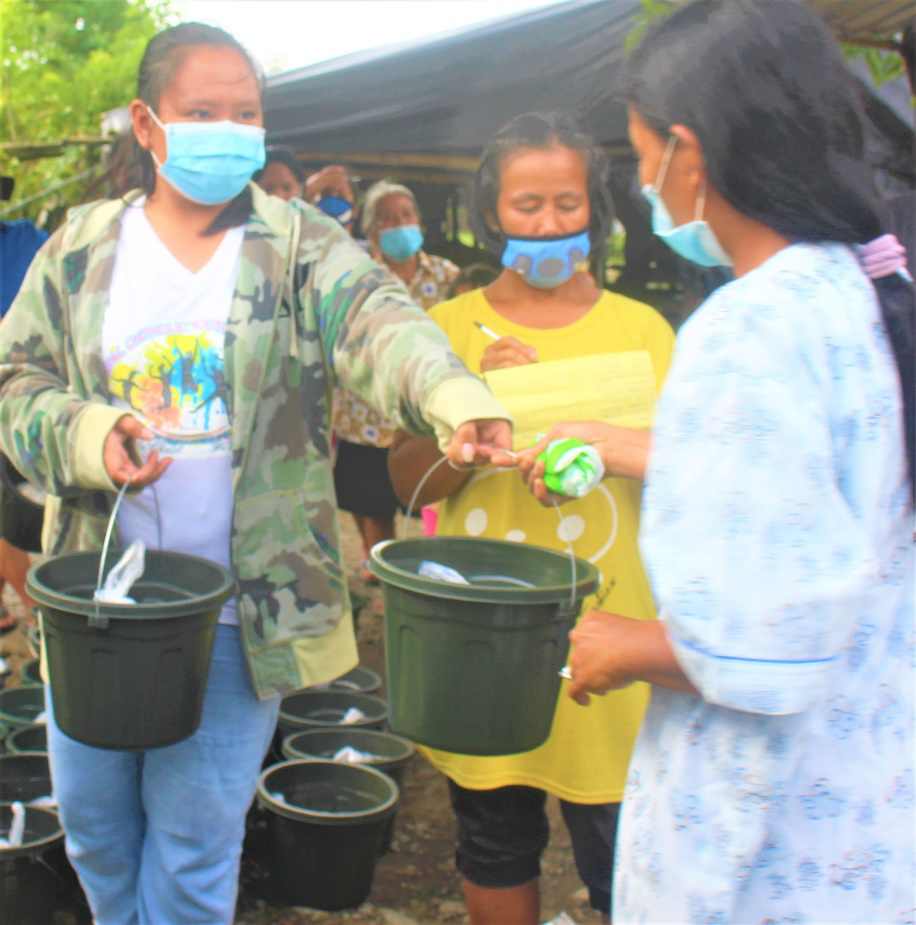 A volunteer from RYSAA gives a relief pack to one of the beneficiaries. -- RYSAA Media Team
The Bicol Region was badly hit by Super Typhoon Rolly on 01 November 2020 with Oas in Albay severely affected.  In response to their clamor for help, the NAMRIA BBD made coordinations for the third relief drive with Barangay Iraya Sur, Oas, Albay, through its Punong Barangay Maria Teresa R. Rances.  The NAMRIA BBD was represented by Chief-of-Staff (COS) Rowena E. Bongalos in the distribution of 200 relief bags and four boxes of pre-loved clothes held at the Iraya Sur Multi-Purpose Farmers Training Center, Barangay Iraya Sur, Oas, Albay on 07 December 2020.  Iraya Sur Punong Barangay Rances thanked NAMRIA for its kind gesture to her kabarangays.  She promised that the donated goods will be given to those who need them the most. 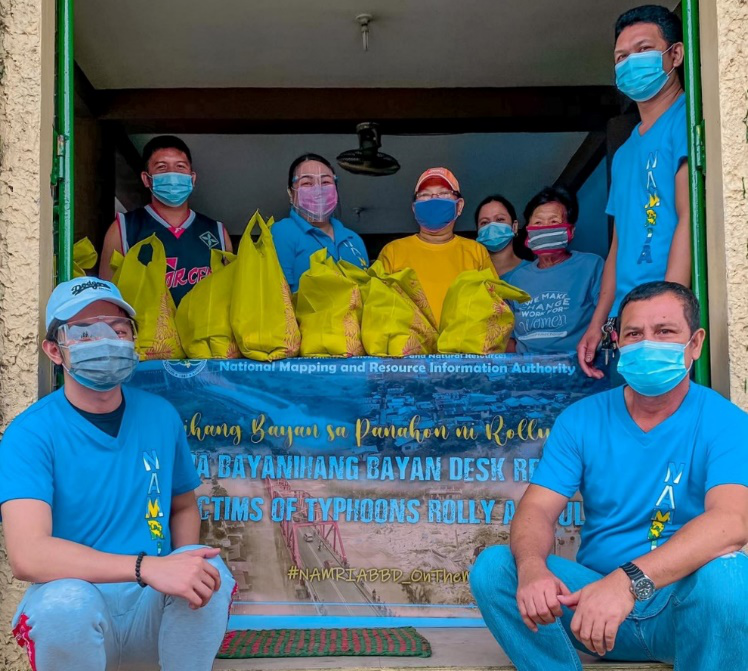 COS Bongalos and the BBD volunteers pose for a souvenir photo before the distribution of relief bags.
-- PRECIOUS REBECCA BONGALOS COS Bongalos hands over a relief bag to one of the beneficiaries. -- PRECIOUS REBECCA BONGALOS
In a related development, the NAMRIA BBD handed over boxes of relief goods (canned food, bottled water, and soaps [dishwashing, laundry, and bath]); bags/boxes of pre-loved clothes and toys; and a 25-kilo sack of rice to the Our Lady of Penafrancia de Manila (OLPM) Parish on 20 December 2020.  On behalf of its parish priest, Rev. Fr. Carmelo P. Arada, Jr., members of the Samahang Kapatiran ng Nuestro Senor Jesus Nazareno (SKNSJN)-OLPM received the donations from BBD representative Jessica A. Quodala of the Office of Deputy Administrator Jose C. Cabanayan, Jr.  The donations were for the victims of the fire that ravaged portions of Barangays 823 and 824, Zone 89, District V (Paco) of Manila City on 16 December 2020.  The relief goods were donated to BBD by Resource Data Analysis Branch Director Rijaldia N. Santos, PhD and LCdr. Gilbert A. Alviola of the Hydrography Branch. 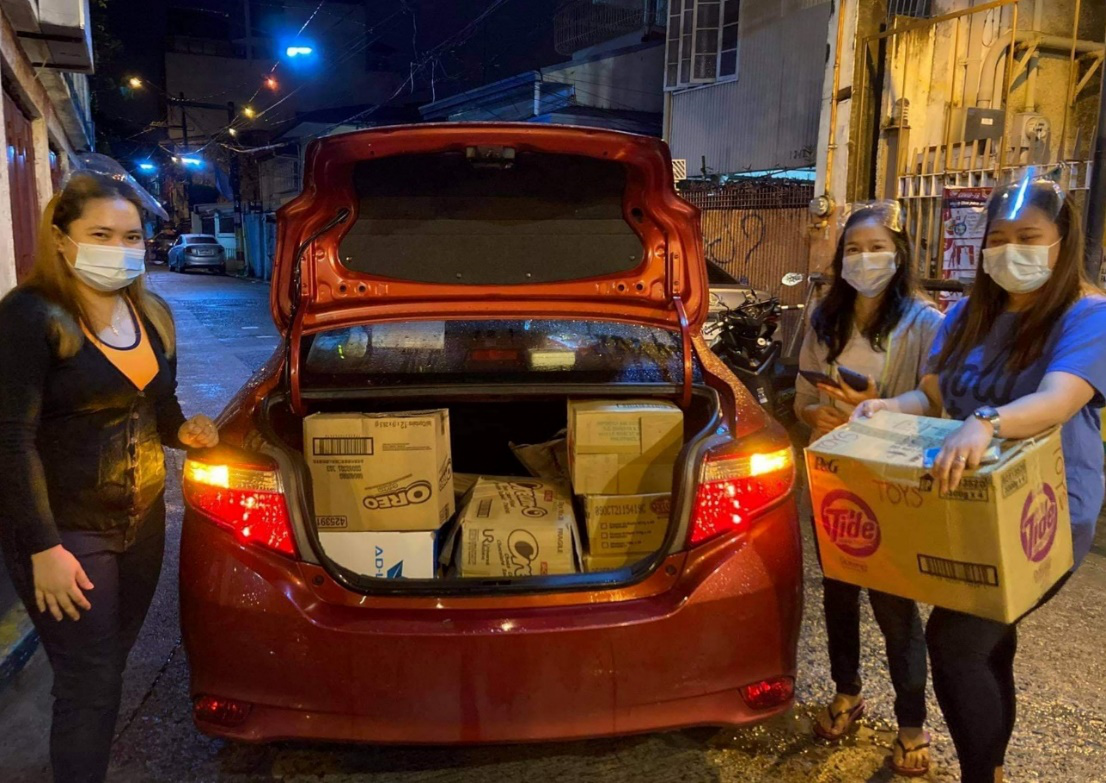 BBD representative Quodala (left) and friends pose for a souvenir photo with the donations prior to their turnover to OPLM.
-- JEFFREY A. QUODALA 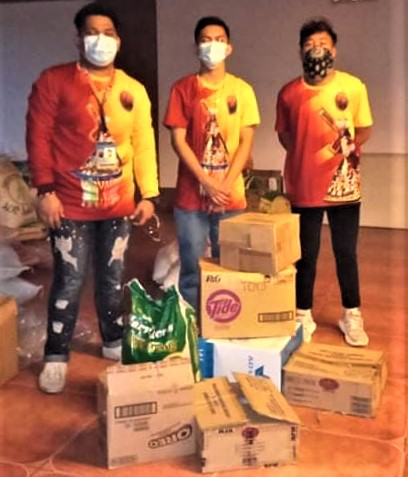