NAMRIA Administrator, Usec. Peter N. Tiangco was the recipient of the Most Outstanding Alumnus Award, otherwise known as the Mancono Award, of the College of Forestry and Natural Resources Alumni Association (CFNRAA).  Mancono is the common name for the Philippine ironwood (Xanthosternon Verdugoniames Vames), a tree species native to the Philippine that is known to yield the hardest timber. 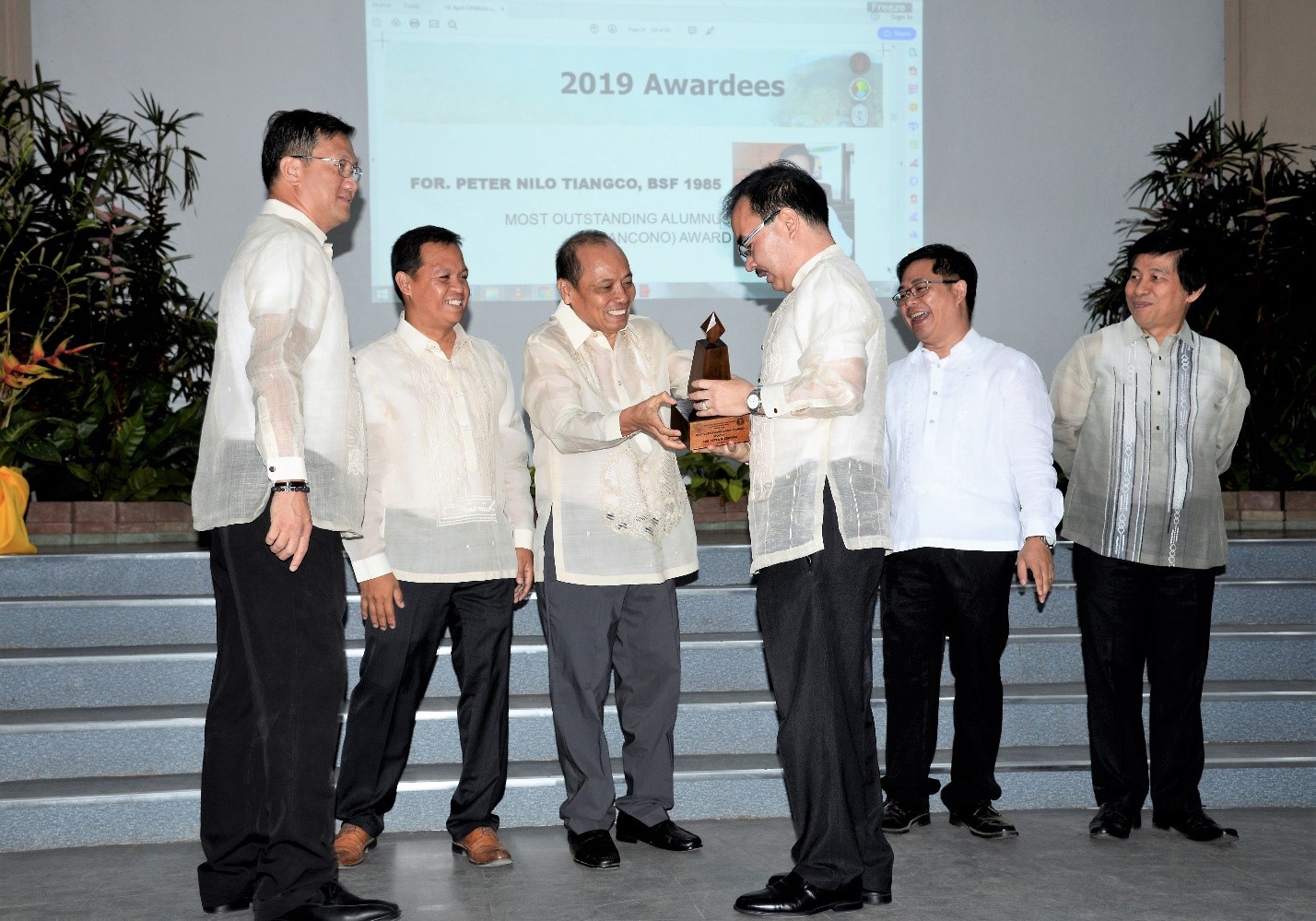 NAMRIA Administrator Tiangco is given the Mancono Award.
With the theme Manggugubat: Handa sa Pagbabago, the award was given during the 109th CFNRAA Founding Anniversary and Alumni Homecoming held at the Nicolas P. Lansigan Auditorium, College of Forestry, University of the Philippines (UP) Los Baños (LB) Campus in Laguna on 26 April 2019.  Fellow CFNRAA alumni awardees from government and private sectors, academe, non-government organizations, and the military also attended the event. 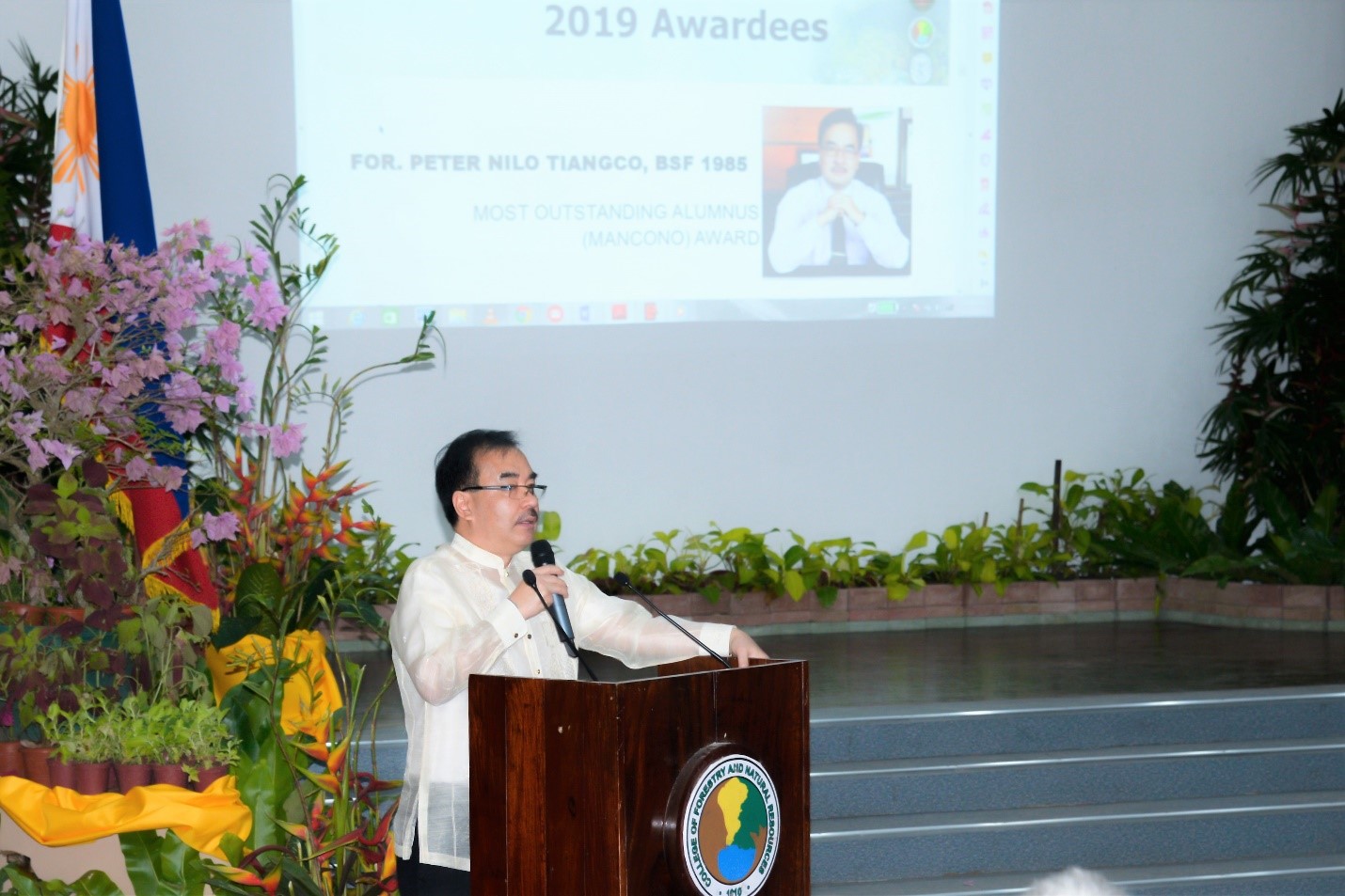 The Administrator delivers his acceptance speech and the response on behalf of the alumni awardees.
The Administrator was chosen for his more than 30 years of experience in space technology applications in natural resource development planning and management highlighted by his extensive field practice, research, technical training and specialized skills in remote sensing, geographic information system, and global positioning system applications.  Under his leadership, NAMRIA played a vital role in the successful preparation of the country’s Extended Continental Shelf submission and its defense before the United Nations Commission on the Limits of the Continental Shelf that added 135,506 square kilometers of seabed to the country’s area of jurisdiction; provision of key technical assistance in the conduct of negotiations with neighboring coastal states for the delimitation of overlapping maritime boundaries, which was instrumental in the signing of the historic maritime boundary agreement between the Philippines and Indonesia in 2014; formulation of a landmark government policy, which implemented the United Mapping Program for detailed planning and project development; formulation of a strategic framework that serves as template to all member states on the use of geospatial information before, during, and after disaster events; and his serving as the Chairperson of the UN Group of Experts on Geographical Names, Asia South East Division, that provides technical recommendations on standardizing geographical names at the national and international levels.  In addition, he spearheaded the upgrade of tide monitoring stations all over the country and the ISO Certification for Mapping and Geospatial Information Management of the agency for the past seven years. 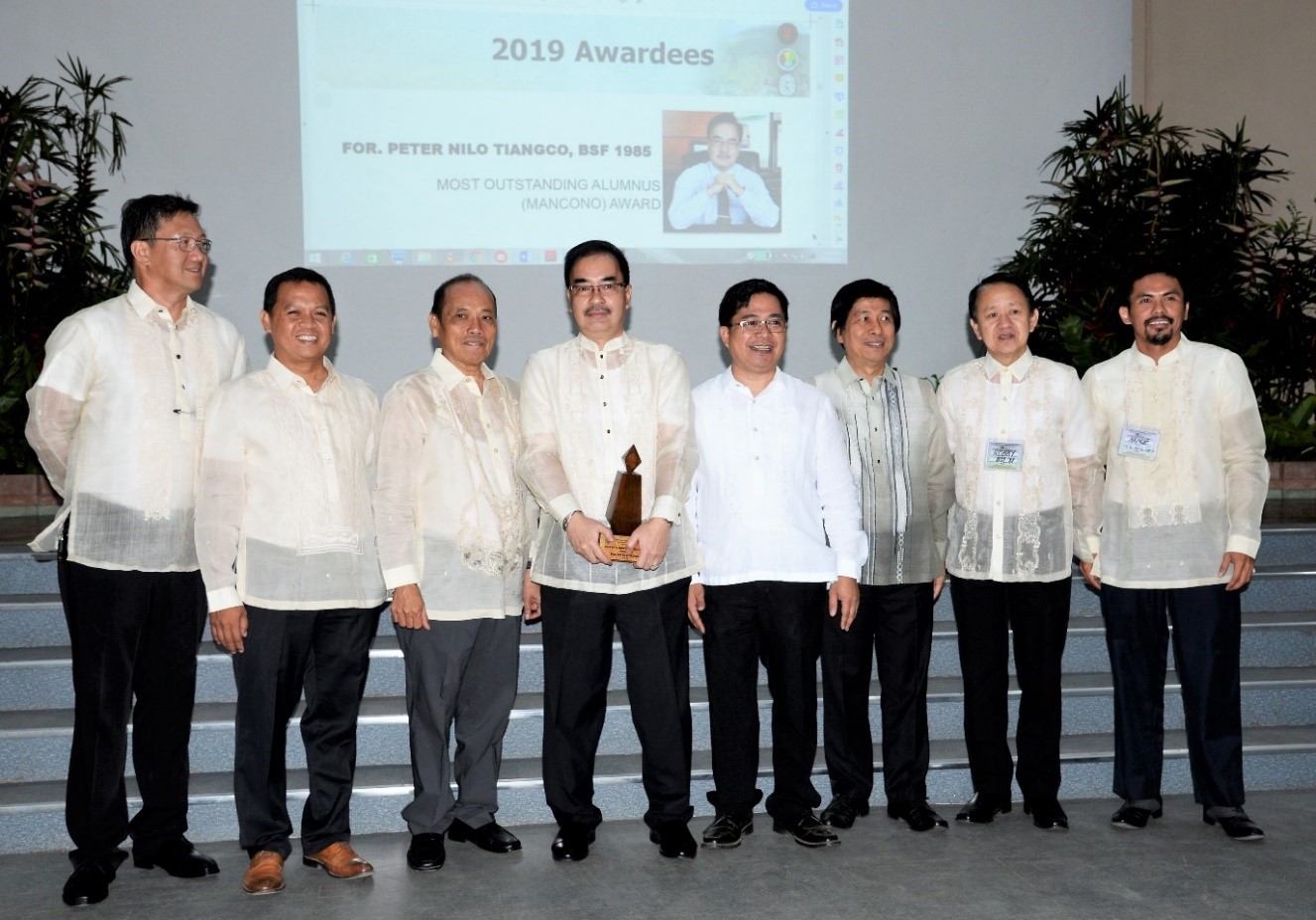 The Administrator poses for souvenir pictures with CFNRAA officers… 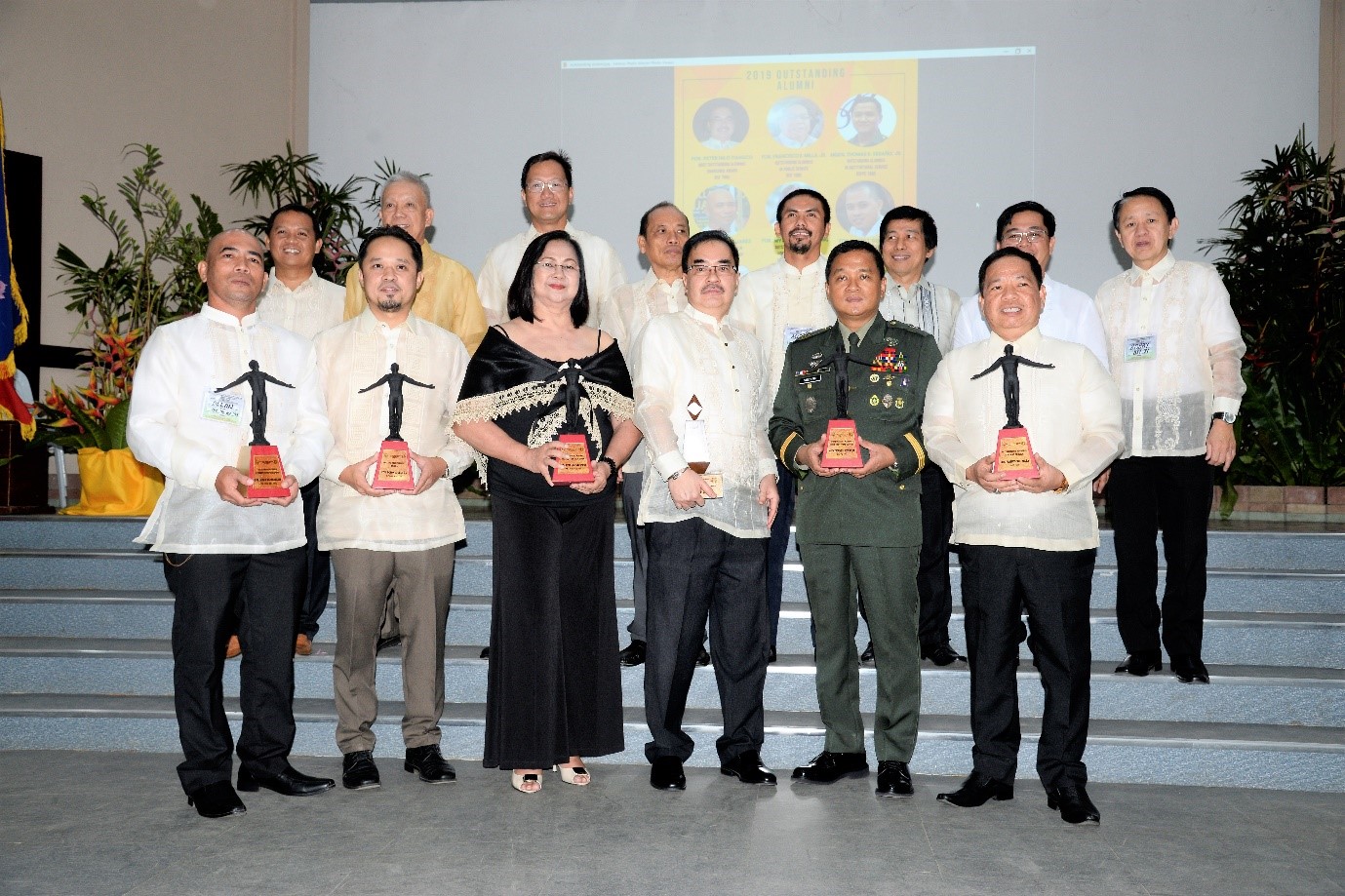 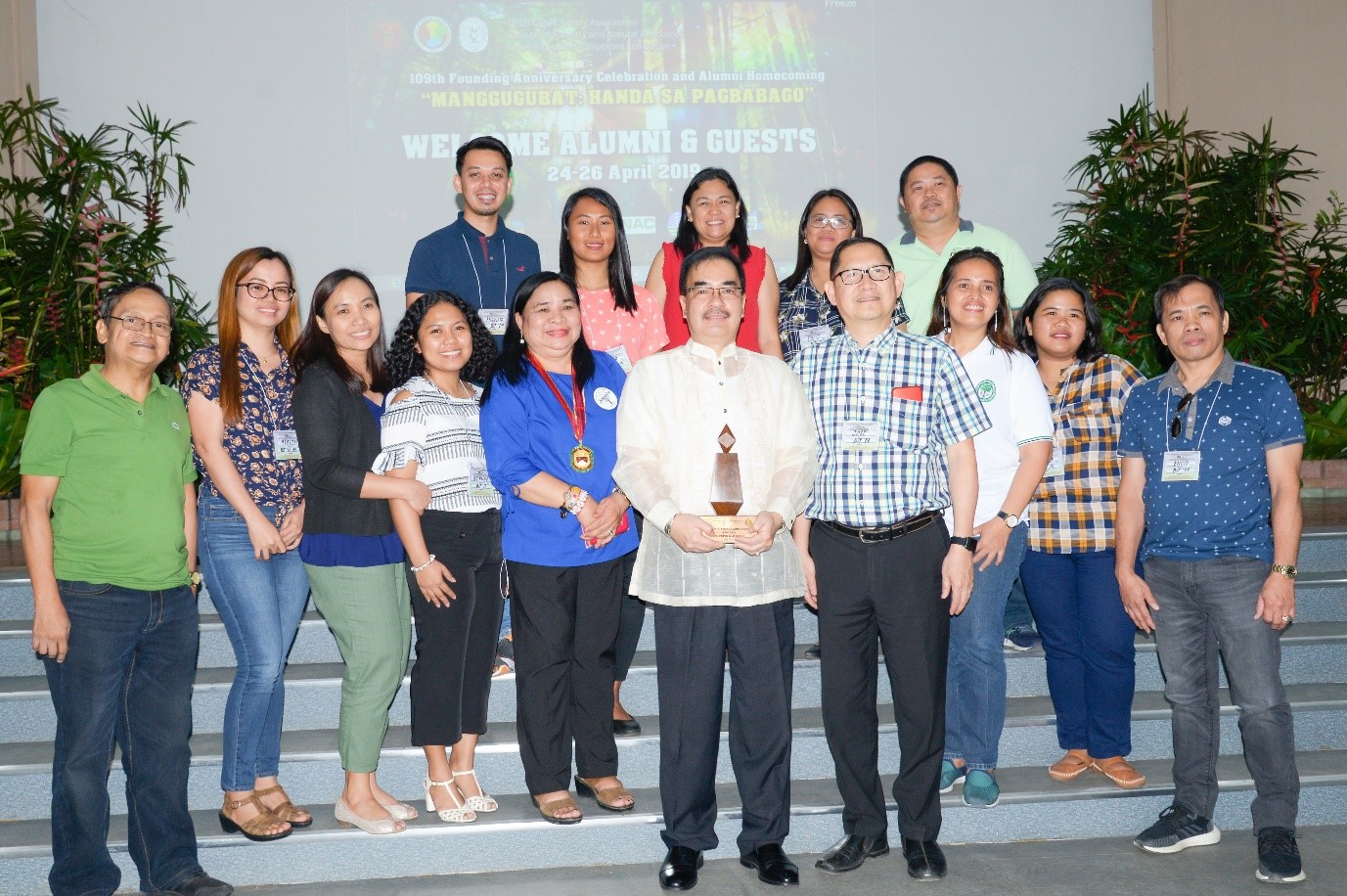 …NAMRIA employees, and fellow foresters like
NAMRIA DA Jose C. Cabanayan, Jr. (to the Administrator’s left).
Administrator Tiangco earned his Bachelor of Science degree in Forestry from UPLB, 1985; Master of Science degree in Natural Resources Development and Management from the Asian Institute of Technology in Bangkok, 1992; and his Doctorate degree in Geomatics from the University of New South Wales in Sydney, 2000.  He has several local and international awards, distinctions, and memberships.  These include the following: 2018 UP Alumni Association Distinguished Alumnus for Public Service and Good Governance; 2015 Outstanding UPLB Alumnus for Good Governance; 2012 Distinguished Alumnus for the Public Sector from the Asian Institute of Technology Alumni Association; 2011 Outstanding Professional of the Year in the Field of Forestry from the Professional Regulation Commission; 2010 Distinguished Alumnus Award from UPLB CFNRAA; 2009 Special Recognition Award for Career Achievement from UPLB CFNRAA; and 2011 Head of the Delegation, Defense of the Philippine Claim for the Extended Continental Shelf in the Benham Rise (now Philippine Rise) Region, before the United Nations. 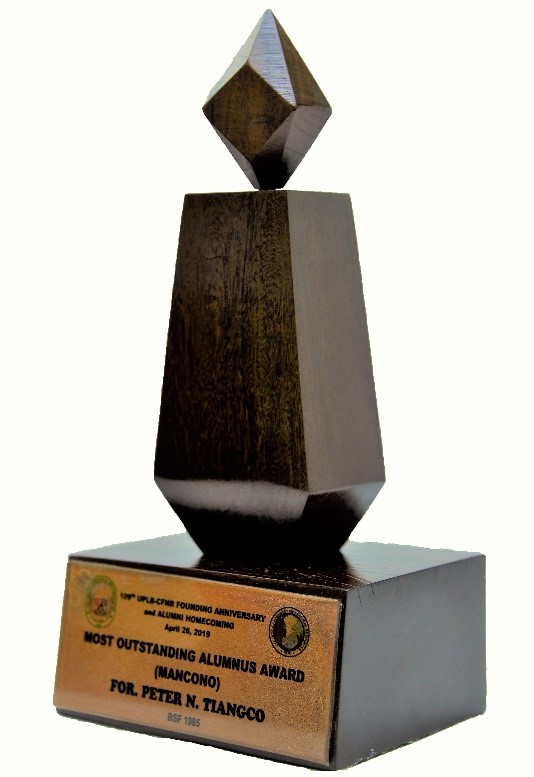 The Mancono Award
NAMRIA Administrator Tiangco gave the response on behalf of the alumni awardees.  In his acceptance speech, the Administrator thanked the UPLB-CFNRAA Awards Committee for the prestigious award given to him.  He also expressed his heartfelt gratitude to the people who served as his guides and inspirations in life.  He further said, “I wish to say that my journey does not stop here today, for I promise to still be the best Forester I can possibly be, for God and Country most of all.”
[Reference used in writing of article: UPLB-CFNR Alumni Association (2019, April). 2019 UPLB CFNR Awardees: For. Peter Nilo Tiangco, BSF 1985, Most Outstanding Alumnus (MANCONO) Award.  CFNR Alumni Aura, Special Issue, 5.]