NAMRIA Administrator, Usec. Peter N. Tiangco was the recipient of the 2018 Distinguished Alumnus Award in Public Service and Good Governance of the University of the Philippines Alumni Association (UPAA).  With the theme Mga Haligi ng Lahi,the award was given during the UP General Alumni Homecoming held at Ang Bahay ng Alumni, UP Diliman Campus, Quezon City on 18 August 2018.  The event honored successful alumni who have transformed, according to the UPAA, from mga iskolar ng bayan to pillars of the nation.  Hundreds of UP alumni from the government and private sectors, academe, non-government organizations, and the military attended the event. 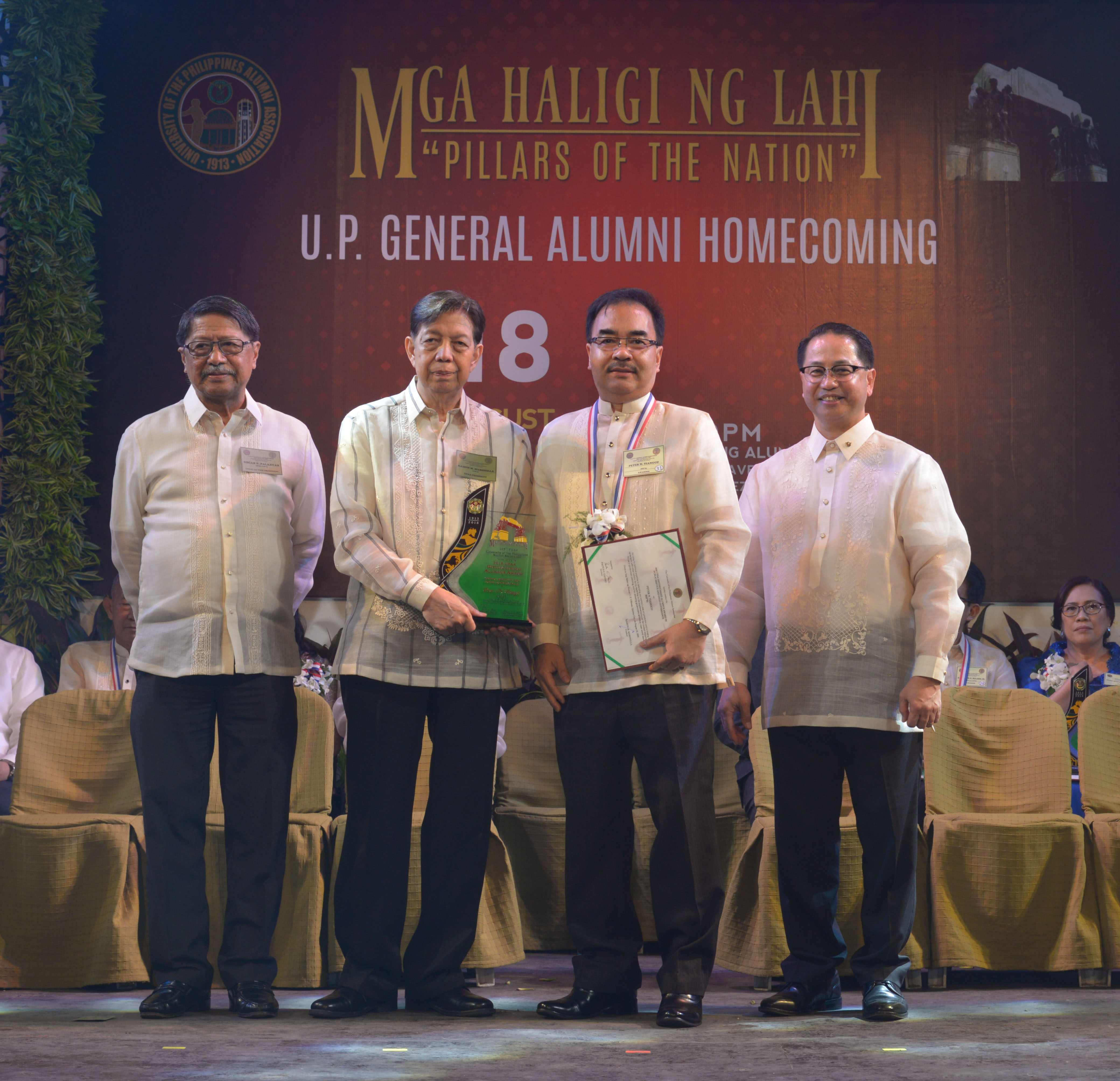 UPAA President Ramon M. Maronilla (second from left) confers the Distinguished Alumnus award to
NAMRIA Administrator Tiangco.  With them are UPAA 1st Vice President Oscar P. Palabyab (leftmost) and
UP President Danilo L. Concepcion (rightmost).
Administrator Tiangco graduated with a Bachelor of Science degree in Forestry in 1985, earned his master’s degree in Natural Resources Development and Management from the Asian Institute of Technology in Bangkok, Thailand in 1992, and his Doctor of Philosophy in Geomatics from the University of New South Wales in Sydney, Australia in 2000.
He was chosen by the UPAA for the Distinguished Alumnus award because of his invaluable services, integrity, and significant achievements as head of NAMRIA.  One of his significant accomplishments is heading the delegation that successfully defended the Philippine claim for an extended continental shelf in the Philippine Rise (formerly Benham Rise) before the United Nations Commission on the Limits of the Continental Shelf.  This resulted in a total of 135,506 square kilometers of seabed added to the country’s area of jurisdiction. UP officials and the awardees pose for a souvenir picture
Under his leadership, NAMRIA’s technical contribution became instrumental in the signing of the historic maritime boundary agreement between the Philippines and Indonesia in 2014.  The maritime agreement was signed after almost 20 years of negotiations.  NAMRIA also upgraded the tide monitoring stations of the country and achieved, in 2012, agencywide certification to the International Organization for Standardization (ISO) 9001:2008 standard on Quality Management Systems (QMS), for its core process of mapping and geospatial information management.  To date, the agency is awaiting results for its efforts to migrate from ISO 9001:2008 to ISO 9001:2015 in order to respond to the latest trends and be compatible with other management systems.
Administrator Tiangco led the formulation of a landmark government policy which brought about the implementation of the Unified Mapping Program for detailed planning and project development.  As co-chair of the United Nations Committee of Experts on Global Geospatial Information Management (UN-GGIM) Working Group on Disasters (WG-Disasters), he led the formulation of a strategic framework that will serve as template for all member states on the use of geospatial information before, during, and after disaster events.  From 2014 to 2018, he served as the chairperson of the UN Group of Experts on Geographical Names (UNGEGN), Asia South East Division.  The UNGEGN is mandated to provide technical recommendations on standardizing geographical names at the national and international levels. 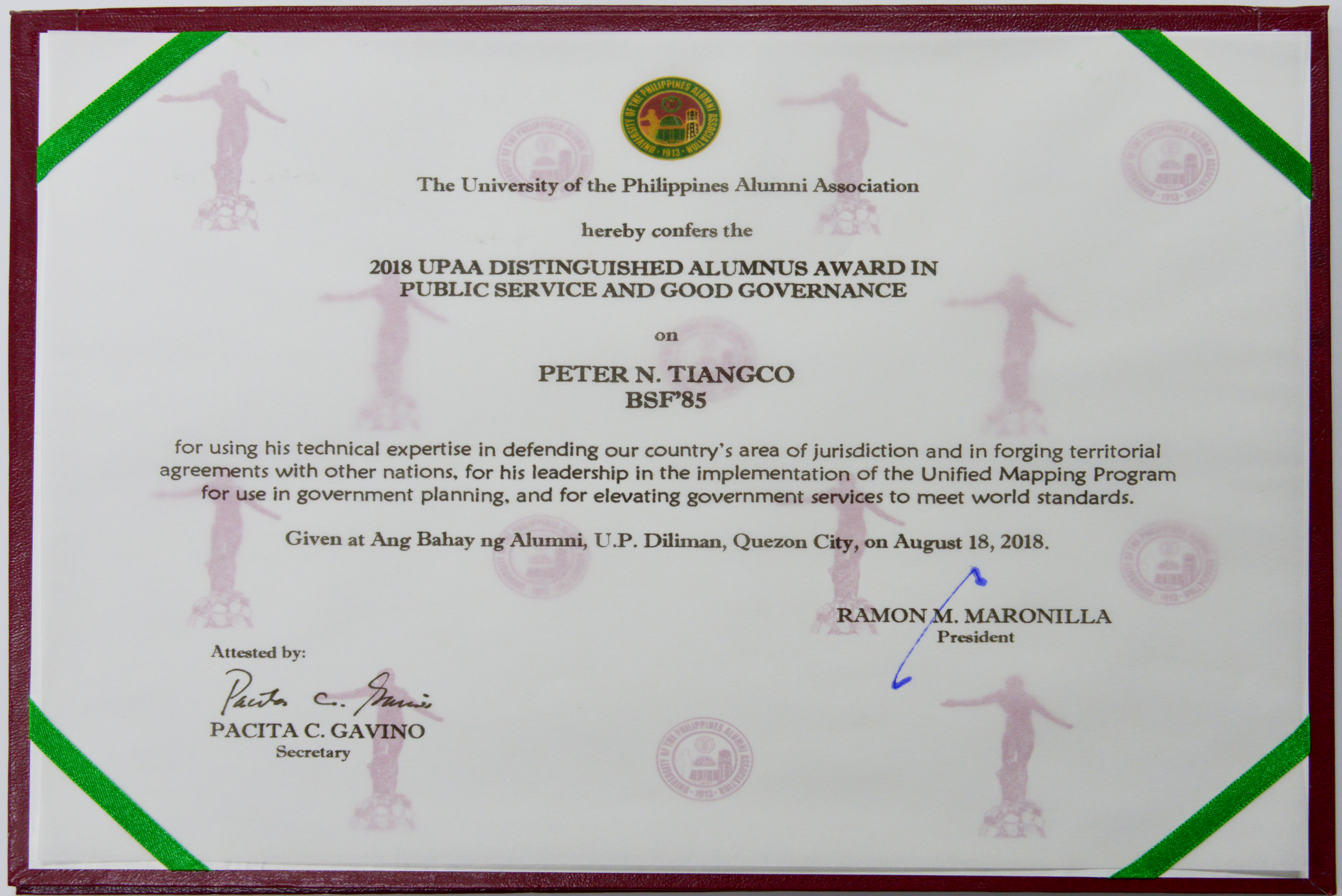 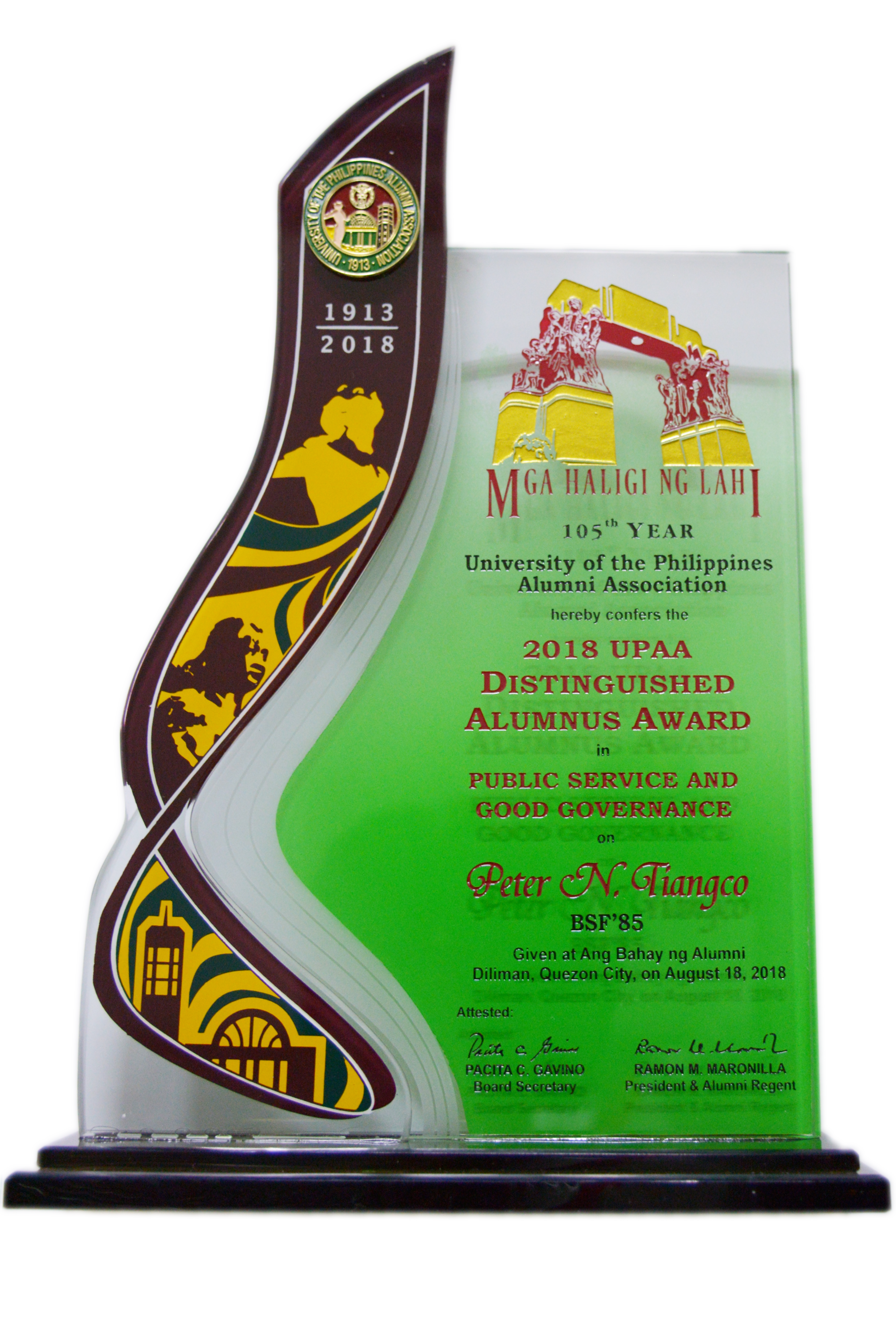 Administrator Tiangco is also a recipient of awards from the Alumni Associations (AA) of the College of Forestry and Natural Resources (CFNR) of the University of the Philippines at Los Baños (UPLB), the UPLB, and the Asian Institute of Technology (AIT) such as the UPLB-CFNR-AA Outstanding Alumnus Award for Government Service in 2011, the UPLB-AA Outstanding Alumnus for Good Governance in 2015, and the AIT-AA Distinguished Alumni Award in the Category of Public Sector in 2012.  He is also the recipient of the Outstanding Professional of the Year Award in the field of Forestry in 2011 from the Professional Regulation Commission.