NAMRIA, through the Geodesy Division of the Mapping and Geodesy Branch (MGB), launched an information, education, communication (IEC) campaign on the Modernization of the Philippine Geodetic Reference System (PGRS). The event was held at Dusit Thani Hotel in Ayala Center, Makati City on 26 May 2017. 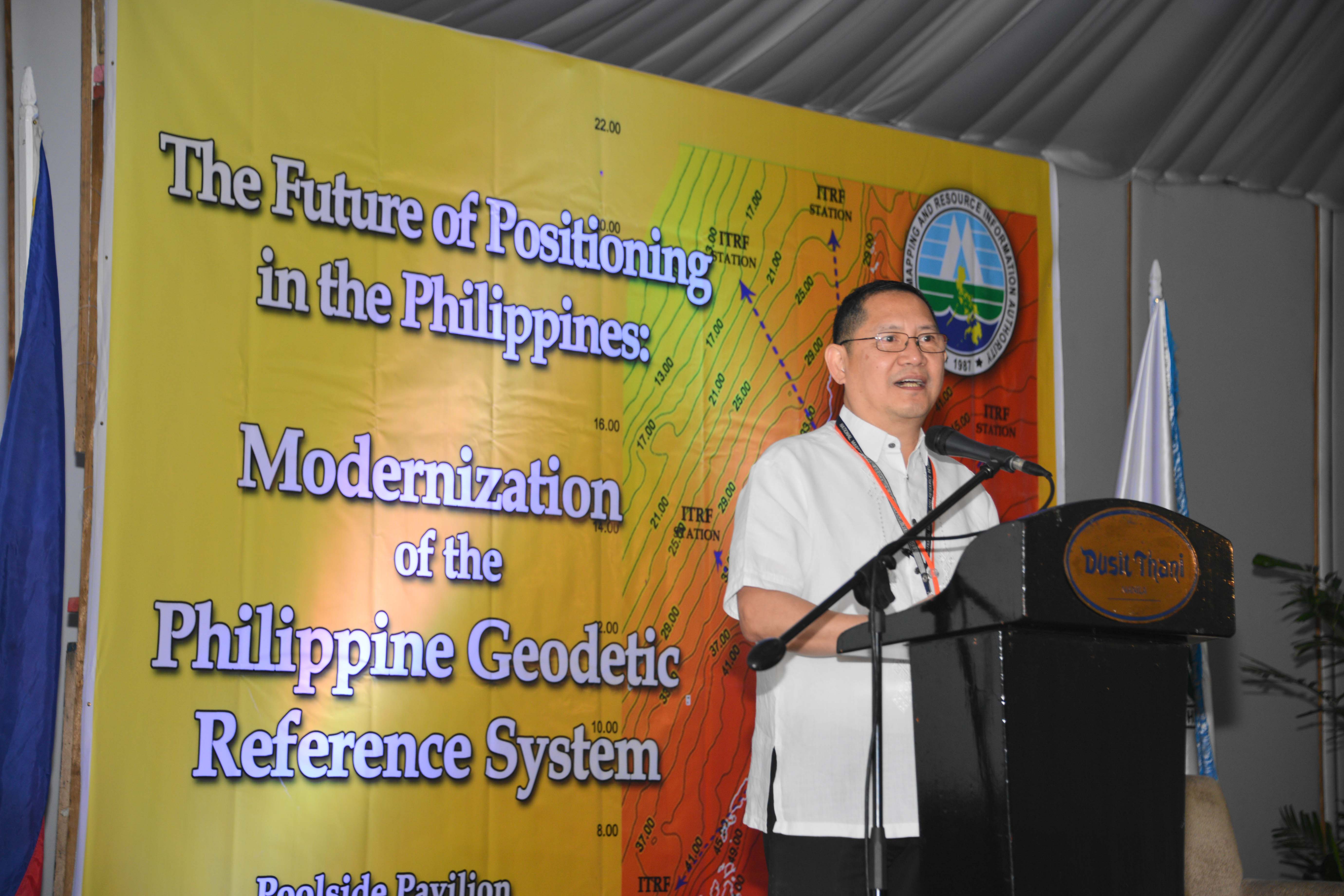 Deputy Administrator Jose C. Cabanayan, Jr. during his welcome remarks
In his welcome remarks, Deputy Administrator Jose C. Cabanayan, Jr. acknowledged all present in the event. He said that the modernization program’s goal is to provide access to an authoritative geodetic reference system aligned to a global geodetic reference frame, which will serve as the common reference for all mapping and surveying in the country. He added that together with the lead countries who made a crucial decision to modernize their geodetic reference system, we will reap the benefits of what the global reference system brings. He also briefly discussed the current geodetic system, the Luzon Datum of 1911, PRS92, and the vertical control network.

Administrator Peter N. Tiangco  (middle) with the participants of the Modernization of PGRS
The United Nations Global Geospatial Information Management (UN-GGIM) initiative encourages all Member States to adopt and sustain a common geodetic reference frame called Global Geodetic Reference Frame (GGRF). This is to ensure long-term sustainability of integrated global observation, namely the Global Geodetic Observing System (GGOS), and adoption of the International Terrestrial Reference Frame (ITRF) as the foundation reference frame. Currently, the geodetic reference system in the country is the Philippine Reference System of 1992 or more commonly known as PRS92. The PRS92 is a static and local system, which has local World Geodetic System 1984 (WGS84) coordinates that are not aligned with the ITRF. 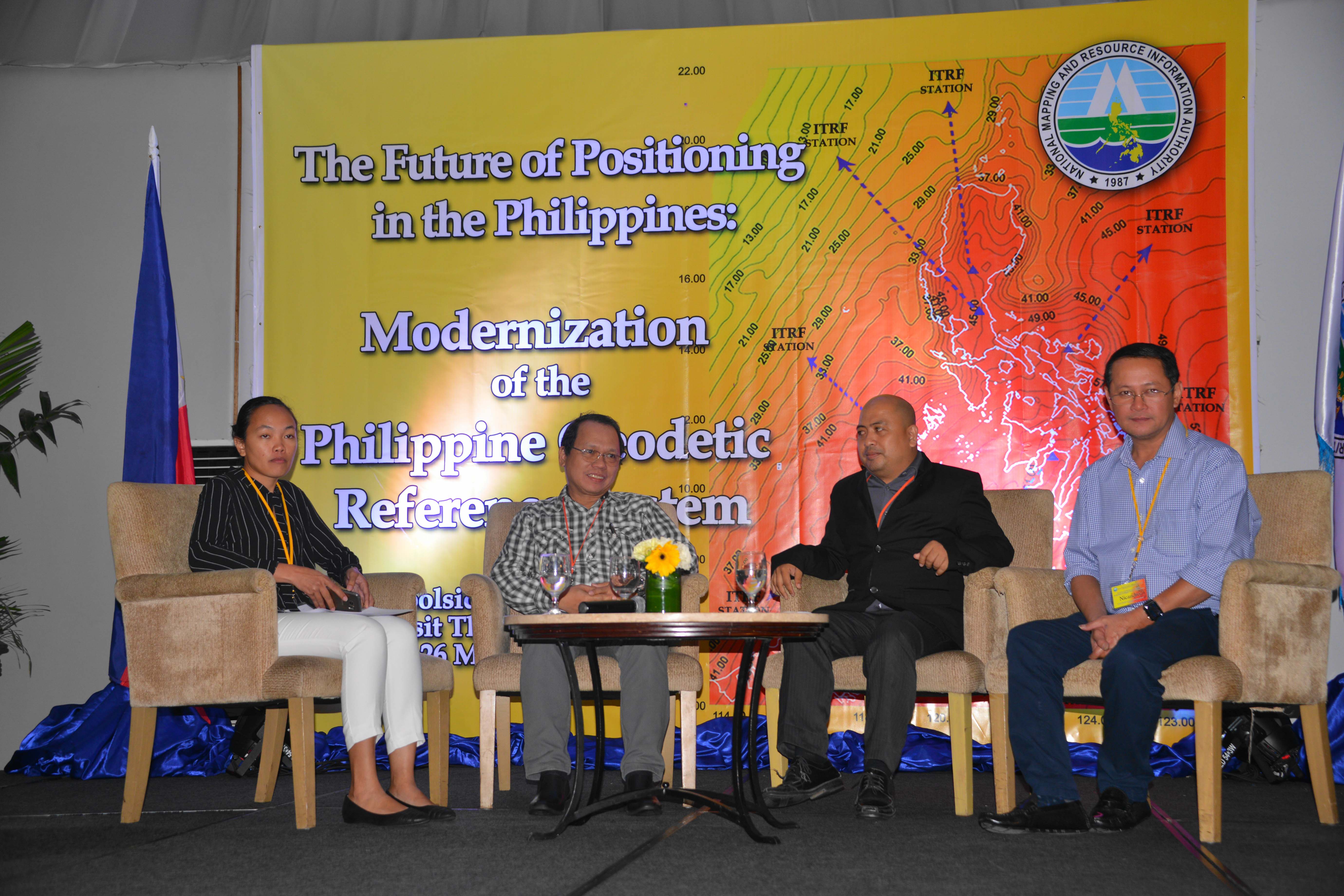 An open forum was conducted after the presentations
In response to UN-GGIM initiative, NAMRIA started to implement the modernization of the PGRS, which will address the limitations and inconsistencies of the current geodetic reference system. The IEC campaign aims to inform and educate all the stakeholders about the datum change, and how this will impact their surveying and mapping activities. Administrator Tiangco during his keynote speech
In his keynote speech, NAMRIA Administrator Peter N. Tiangco talked about the place of the agency in Philippine mapping and surveying through Executive Order 192. He discussed the brief history of NAMRIA and its accomplishments in putting up geodetic control points. The Administrator pointed out that the PRS92 is due for upgrading or modernization, and describes the process as an undertaking that is “meant to be.” He added that the modernization is a vital component of the agency’s thrust to help create a geospatially empowered Philippines by 2020. He said that it is time to change, from old to new, from local to global reference system. Finally, Administrator Tiangco said that in order to be at par with modern countries, international standards compel us to have a geodetic reference system that is interoperable and allows us to exchange data. 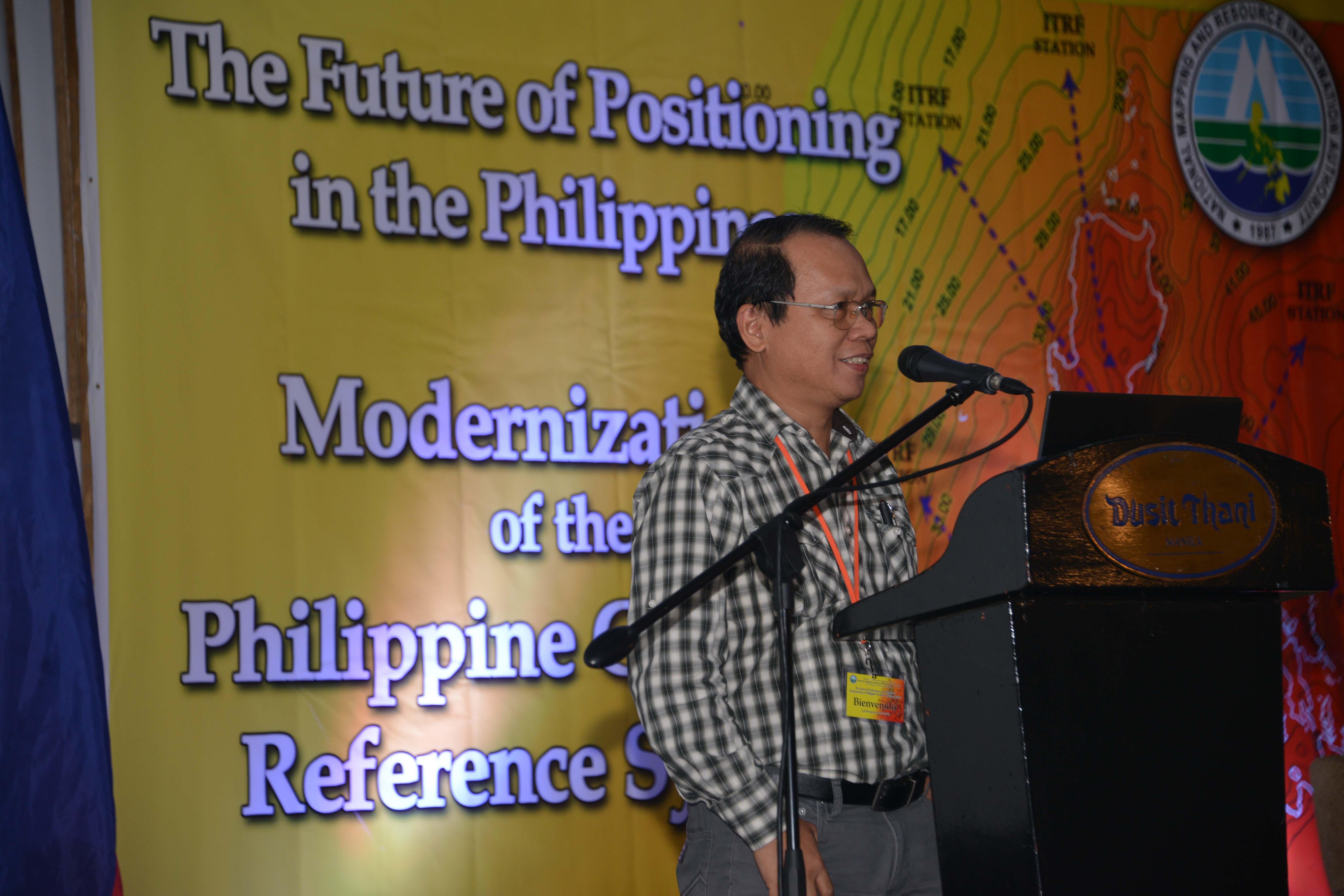 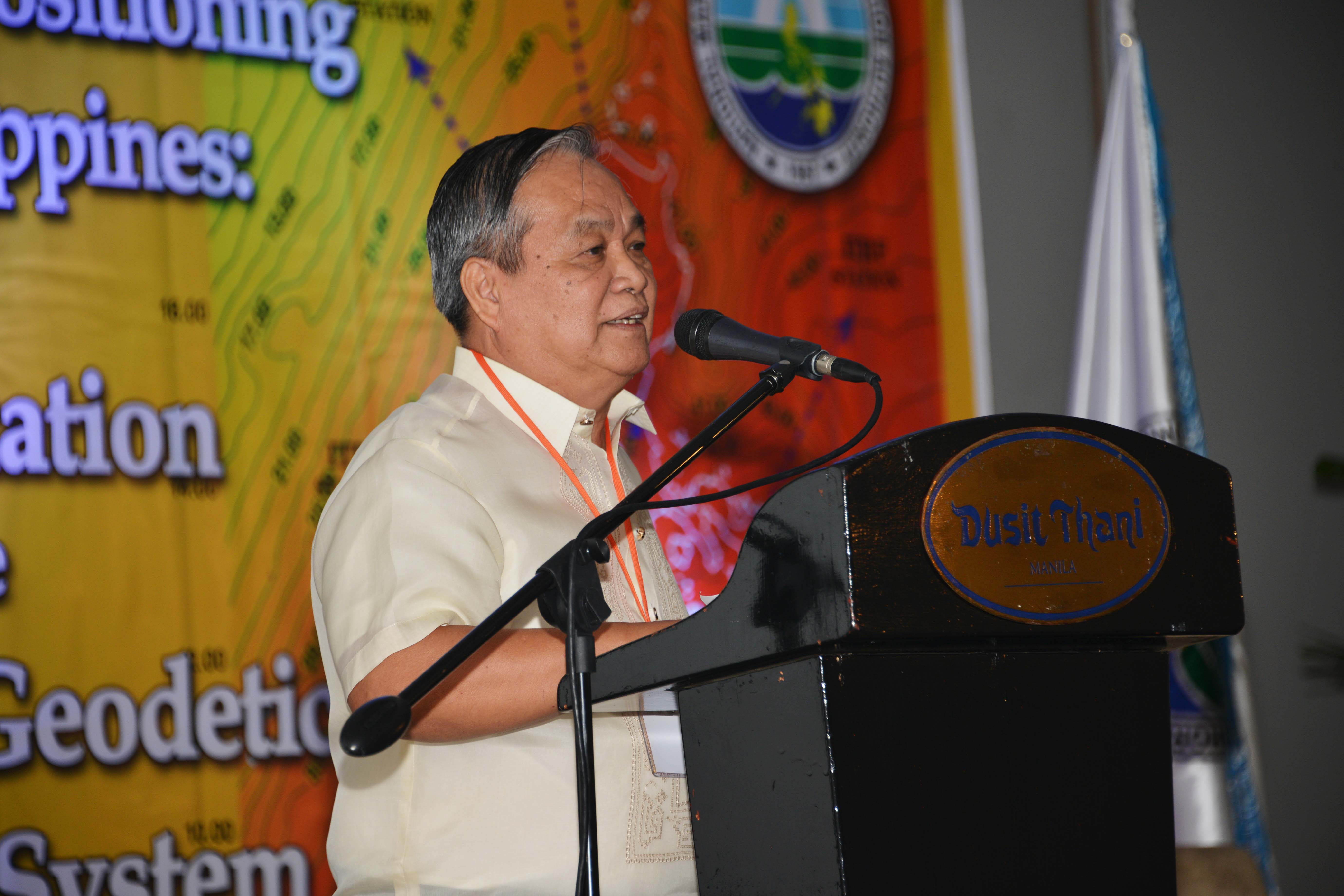 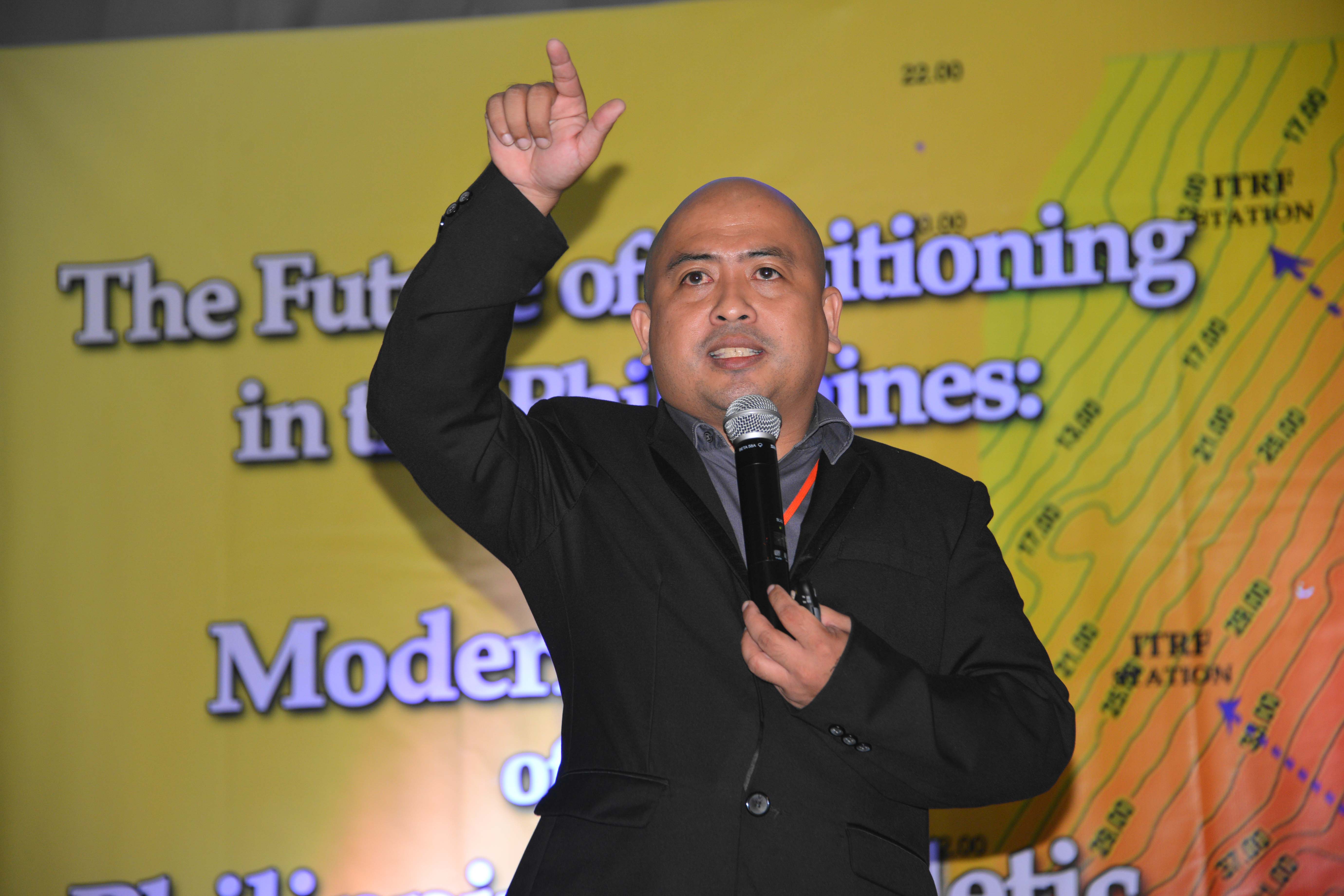 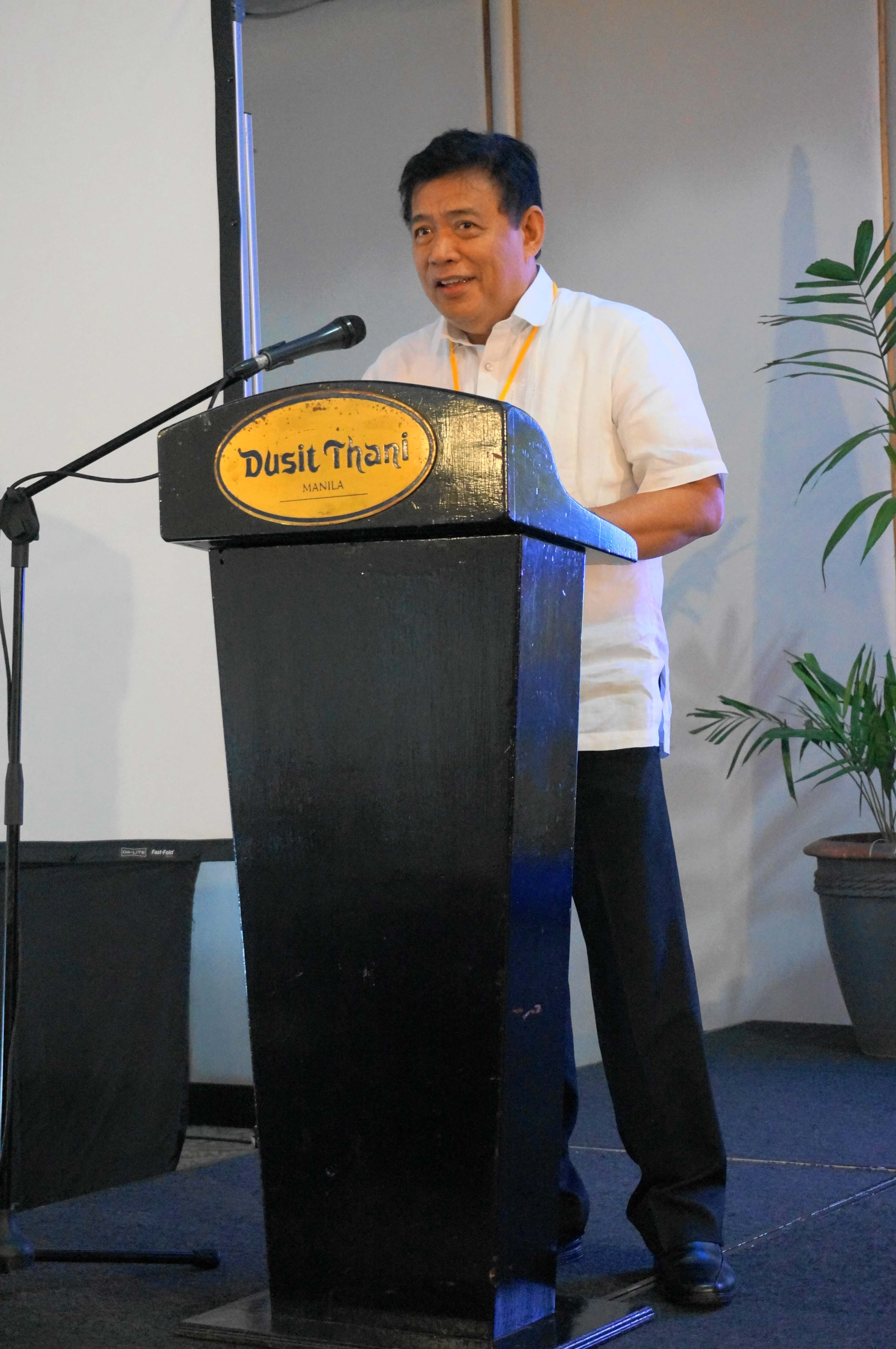 Mapping and Geodesy Branch Director Ruel DM. Belen during his closing remarks
MGB Director Ruel DM. Belen gave the closing remarks and thanked all those who attended, presented at, and organized the IEC event. He also bared the planned IEC for the stakeholders in the regions. On behalf of Administrator Tiangco, Director Belen gave NAMRIA’s assurance of continuing deep commitment to ensure the further development of Philippine Mapping and Surveying, for the benefit of the country and its people.
MGB Director Belen (leftmost) and Resource Data Analysis Branch Director Rijaldia N. Santos (rightmost) with the presenters during the presentation of Certificate of Appreciation ... 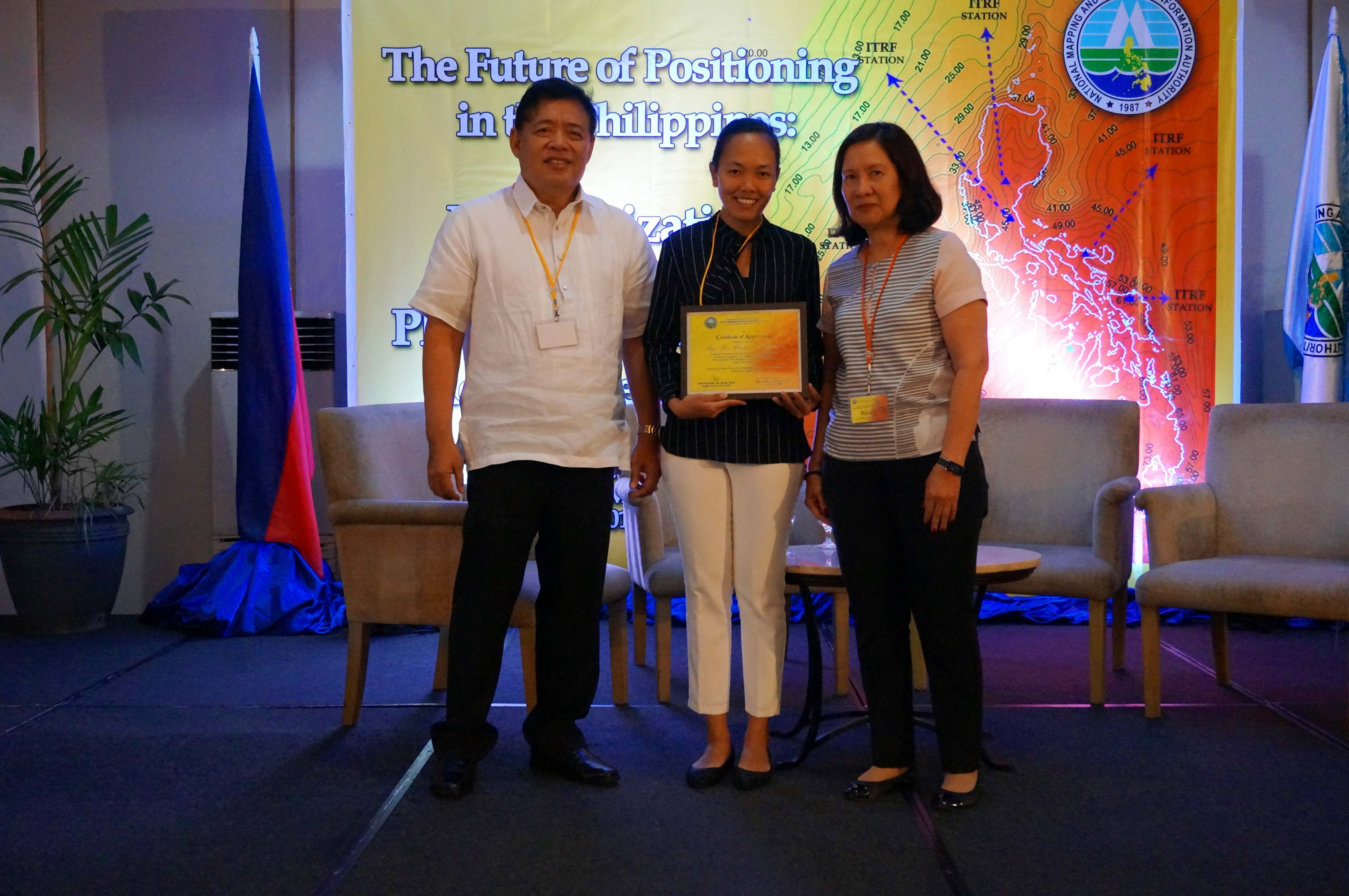 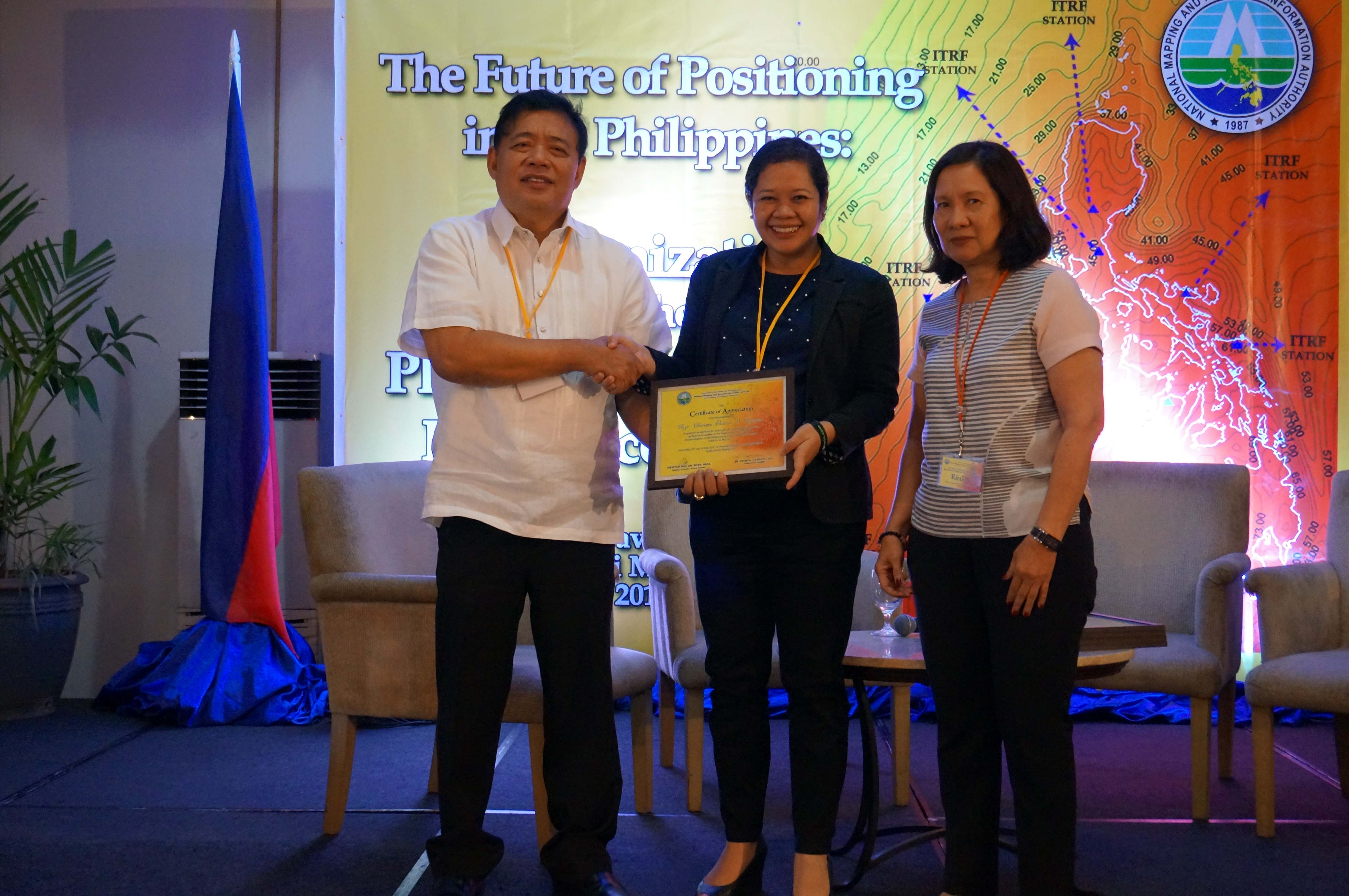 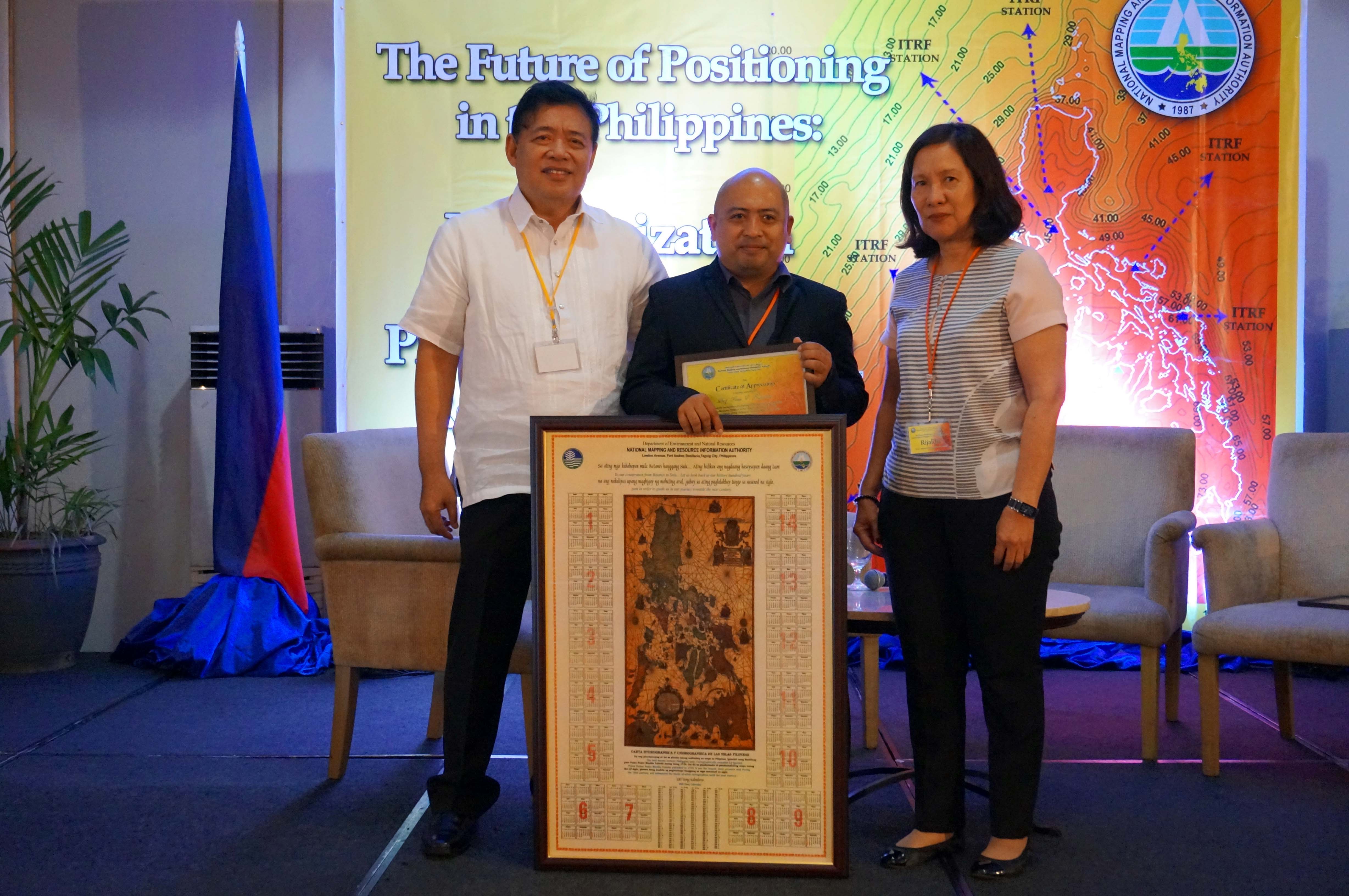 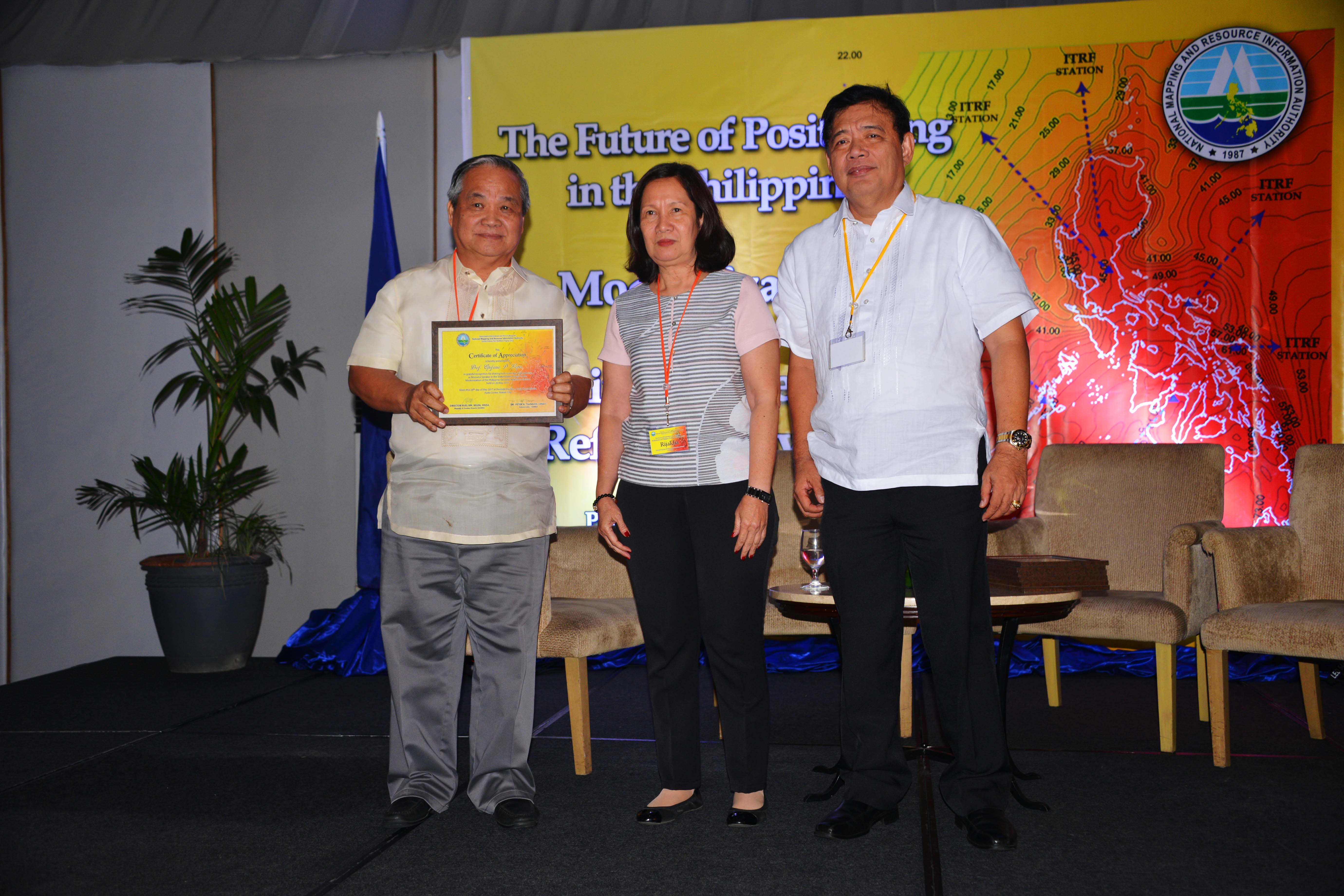